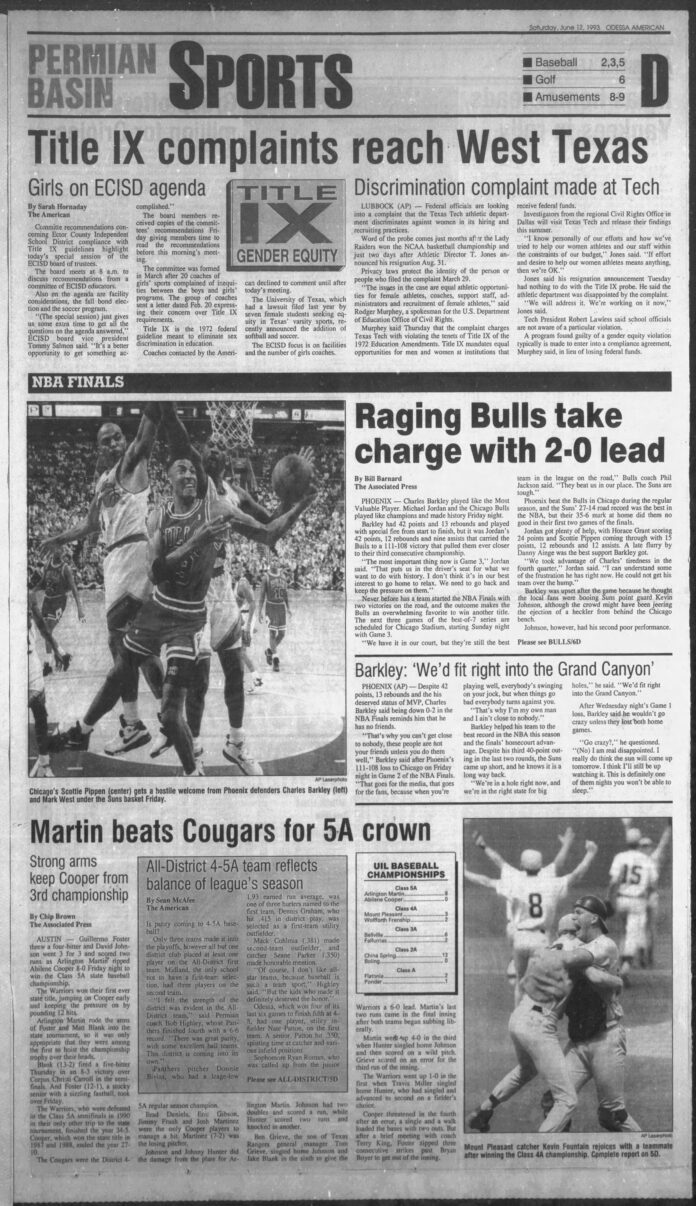 >> 1949: The Odessa Oilers fell 8-2 in the opener of their series against Big Spring at Oiler Park. … Odessa’s Don Cherry and Bob French reached the finals of the West Texas Golf Tournament in Brownwood. Cherry advanced after defeating Midland’s Bill Smith in the semifinals and French booked his spot with a win against Spud Cason of Fort Worth. … Capot won the 81st running of the Belmont Stakes. The colt fought off challenges from Palestinian and Ponder to secure the victory.

>> 1970: The Odessa College golf team moved into second place at the NJCAA national tournament in Miami Beach, Florida. The Wranglers shot a 297 team score to jump from fourth, sitting nine strokes behind leader Miami-Dade (North). … The University of Texas and University of Southern California opened the College World Series with a doubleheader. Texas would face the University of Delaware, while USC played Ohio University. Both schools were considered favorites to win the tournament after defending champion Arizona State failed to secure a bid. … Former Baylor head football coach Frank Bridges died at the age of 79. He coached the Bears from 1920 to 1925, posting a 35-18-6 record, leading Baylor to a Southwest Conference championship in 1924.

>> 1993: A special session was held by Ector County ISD’s board of trustees to discuss committee recommendations regarding Title IX complaints. A committee was formed after 20 coaches of girls sports complained of inequities between boys and girls athletic programs within the district. The district’s focus was on facilities and the number of girls coaches. … Michael Jordan nearly recorded a triple-double to lead the Chicago Bulls to a 111-108 victory over Charles Barkley and the Phoenix Suns. Jordan recorded 42 points, 12 rebounds and nine assists to give the Bulls a 2-0 NBA Finals series lead.

>> 2013: Midland RockHounds pitcher Murphy Smith was among four of the team’s players selected to play in the Texas League All-Star Game. Although Smith shared the same number of wins (five), strikeouts (49) and walks (22) with teammate Zach Neal, only Smith was named to the team. … Permian graduate Christina Valderas returned to Odessa as a headline speaker at the Seventh Annual Basin’s Best Volleyball, Basketball and Softball Clinic. At the time, Valderas was the head softball coach at Duncanville High School.