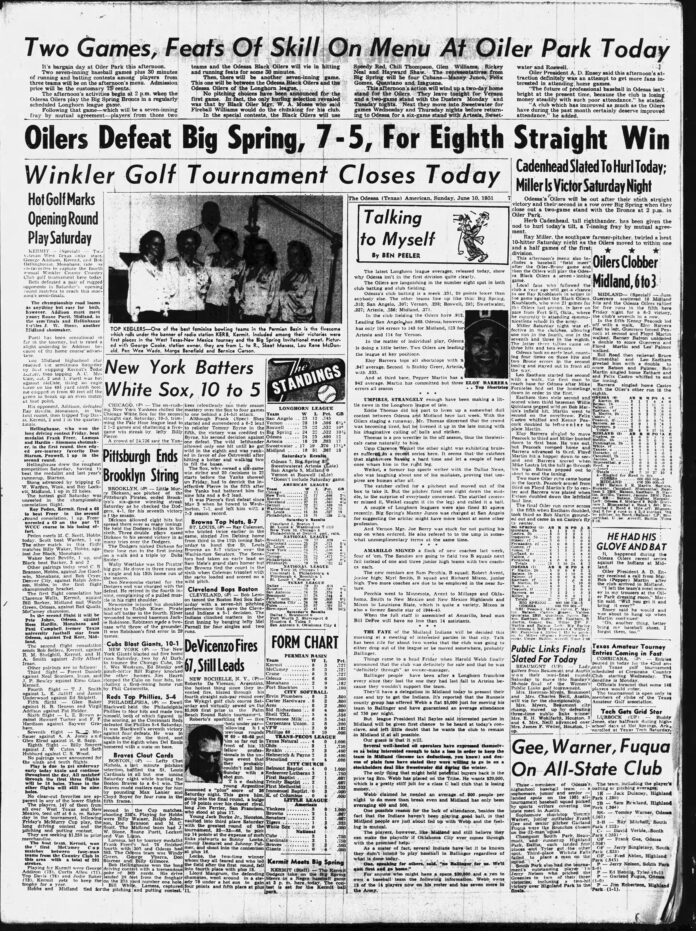 >> 1951: The Odessa Oilers were looking for their ninth straight victory after defeating Big Spring 7-5. Southpaw Ray Miller was the Oilers’ pitcher, allowing 10 hits in the victory. Herb Cadenhead was scheduled to start on the mound in Odessa’s next game, a 7-inning contest by mutual agreement. The team was also scheduled to play the Odessa Black Oilers after their first contest was finished.

>> 1975: Ector High School running back Ronnie Hodges signed a four-year scholarship with Bishop College. The standout ran for 610 yards and seven touchdowns during the 1974 campaign. He was named Ector’s Outstanding Player of the Year and finished ninth in rushing and seventh in receiving in District 2-3A. He was third player from Ector to sign a collegiate offer from the 1974 season. Along with his rushing totals, the running back also caught nine passes for 188 yards with a 20.9 yard reception average.

>> 1995: San Antonio Missions’ Matt Herges pitched two scoreless innings to secure a 4-3 victory against the Midland Angels at Christensen Stadium. Midland’s Ty Boykin and Leon Glenn hit back-to-back home runs, which led to Herges stepping on the mound in the eighth inning. The pitcher struck out Boykin on three pitches to record his first save of the season. Midland was in first place in the Texas League, but the loss put them only one game ahead of the Missions in the standings. At the time, Midland’s Todd Greene was professional baseball’s leading home run hitter. He also struck out and only managed a single against Herges.

LOOKING BACK at June 13

SOFTBALL: Team USA lets bats do the talking in sweep