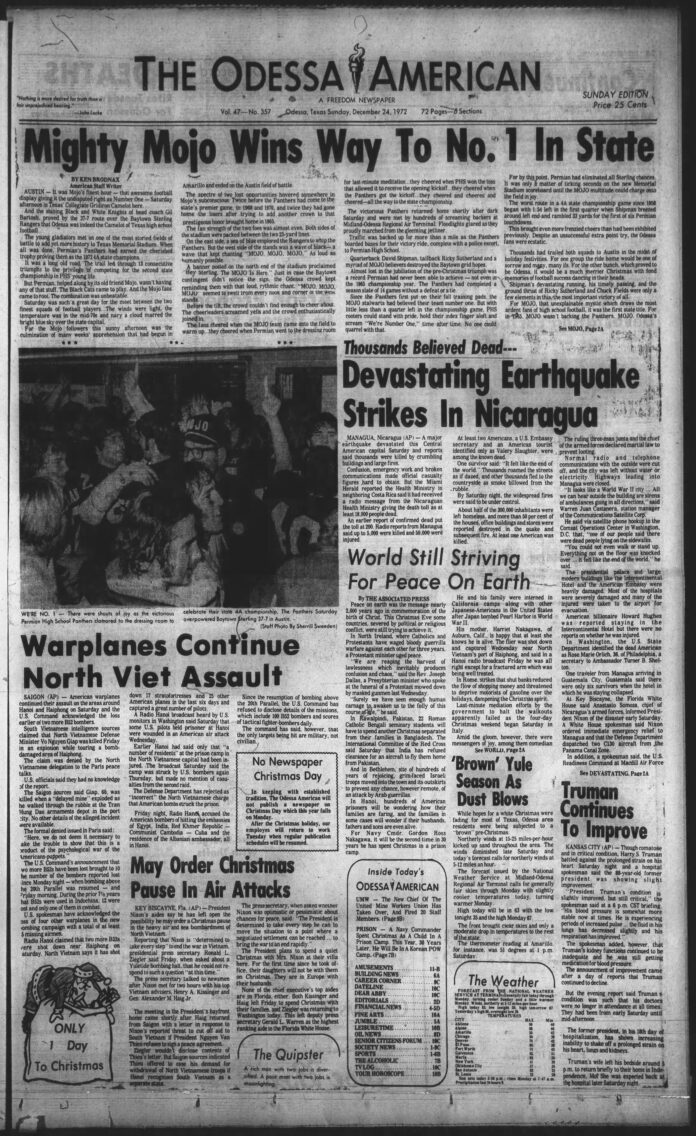 By the time the 1970s came around, Odessa had multiple high schools teams to follow to get its sports fix.

One of those was the Permian football team, as it was a state finalist three times over the decade and it claimed its second state championship in 1972.

Things were changing all around Ector County ISD, as the district would face pressure to start desegregating its schools.

Although Ector High School would spend time competing with Odessa High and Permian, it would eventually be converted into a middle school to move toward desegregation.

All students from Ector would be moved over to Permian and Odessa High in the early 1980s.

Despite rumors of recessions and climbing unemployment rates, businessmen in Odessa still expected to see economic growth and a boom in the area.

With all the moving parts surrounding the city, the schools within the district still found athletic success across different sports.

Here are some of the highlights surrounding ECISD schools over the decade:

Randy Smith’s par on the ninth hole at the Andrews Country Club would help the team secure the championship by finishing a stroke ahead of Lubbock Monterey.

Smith would finish in second place on the individual standings, with Tim Phillips placing fifth and Don King placing 11th.

Permian hurdler Gary West had a strong performance, tying the state record after finishing his race in 13.6 seconds.

West was able to defeat rival hurdler Randy Lightfoot of Plainview, whom he started competing with the season before.

It was the second time the Raiders had defeated the Panthers in the title game, handing Permian an 18-11 loss in 1968.

The game was played at Bobcat Stadium in San Angelo and Permian finished the season with a 14-1 mark.

Ector High would have to wait to see if its regional tournament appearance would be approved.

>> Feb. 27, 1971: The Ector Eagles see their boys basketball season end in the regional tournament with a 73-69 loss to Dumas at the Texan Dome in Levelland.

The game went to double overtime, with both teams tying the game, then trading the lead with each other.

The Panthers would also go on to be named national champions during their undefeated campaign and two seasons later, Bartosh became the head football coach at UTEP.

At this point, John Wilkins was the head coach of the Panthers after taking over the position in 1973.

He would go on to lead Permian to the state semifinals in 1977 and 1978 before winning state championships in the 1980s.

Wilkins is one of the most successful coaches to lead the Permian football program, currently having the team’s campus practice field named after him.

>> March 7, 1976: The Ector High boys basketball team made history by winning the Class 3A state title over Waxahachie by a 78-75 score in Austin.

At one point in the season the Eagles, led by head coach Keith Thompson, had a 10-9 record but they would turn it around completely and finish the season with a 25-10 mark.

The Eagles also impressed because none of their starters were over six feet tall, their best players being Dwight Randolph, Australia Hobbs and Travis Ellis.

The guards were all-state tournament team selections and each stood under 5-foot-10.

>> March 27, 1977: The Odessa High and Permian girls gymnastics teams had strong showings at the District 5-4A meet, taking first and second place respectively.

The Lady Bronchos were led by Lisa Dry and Holly Lee, who placed first and second in all-around action.

Permian would have one more preparation meet, while Odessa High would wait to compete in the regional meet shortly after.