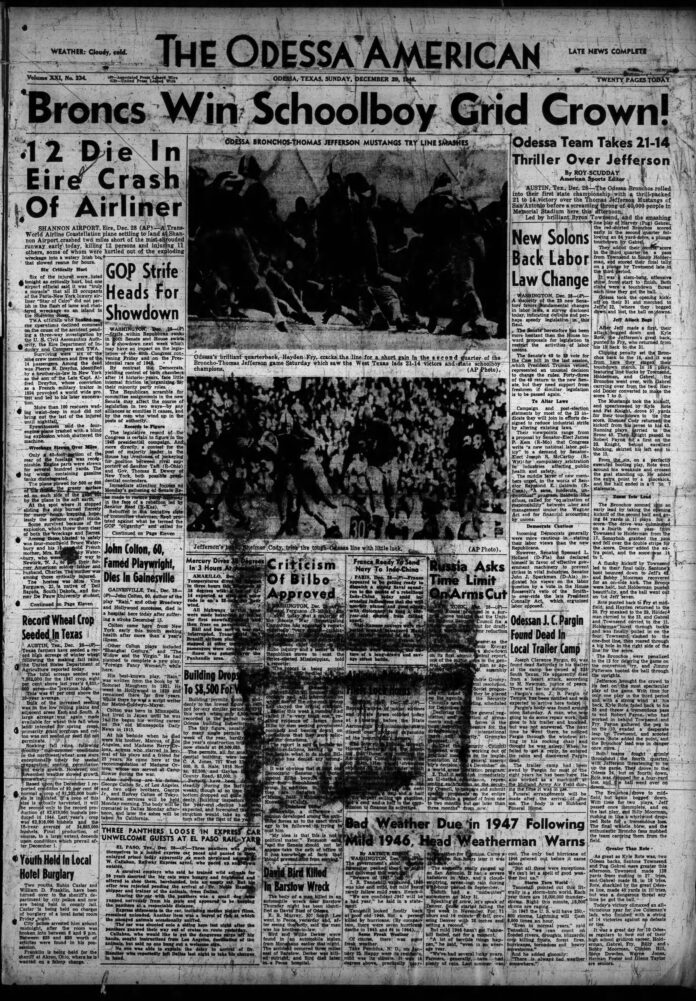 Throughout a large part of the 1940s, the United States was deeply embroiled in World War II.

People from the area saw their names called in the draft and that included Odessa High football coach Joe Coleman, who left his job to join the U.S. Navy to serve in the South Pacific.

Despite the global unrest that gripped many countries, the Odessa High Bronchos and Bronchettes still enjoyed athletic success.

The school’s football team was one that made a big mark that can be seen to this day.

It wasn’t the only program that saw its share of good fortune, as the school’s volleyball and boys basketball team also brought back titles to the city.

After being hired in the late 1930s, this was the decade that saw Coleman truly start to achieve success at Odessa High before he shifted his focus to the war.

His tutelage helped student athletes like Hayden Fry become Hall of Famers themselves later on in their careers.

Here are some highlights from ECISD in the 1940s:

>> Feb. 26, 1940: The Odessa High boys basketball team led by Coleman was set to represent District 31 in the region eight tournament in Alpine.

The Bronchos won the district title after defeating McCamey 26-22 in the championship game.

At the time, the Badgers were considered “heads-on favorites” to win the title after they defeated Wink and Midland High in the district tournament.

Odessa High had reached the championship game after defeating Crane 27-24 in a quarterfinal game and Courtney 25-23 in the semifinal round.

The win set up a tilt with the El Paso High Tigers, who were the winners of District 29.

Both coaches, Coleman of Odessa and Jewell Wallace of El Paso, planned to take their full squads to their regional tournament opening game.

The postseason trip didn’t last too long for the Bronchos, as they were downed 48-24 by El Paso High to open the regional competition.

That El Paso High team advanced to the state championship game where it fell to San Marcos.

>> 1941: Odessa High built off the momentum its 1940 district championship created and went undefeated to close out the 1941 basketball regular season.

A 37-27 win over Sterling City helped Coleman’s Bronchos finish the regular season 20-0 to set up a matchup with Courtney to open the District 31 tournament.

Odessa High went on to add four more wins in the competition, stringing together 24 straight victories and winning their second consecutive district title.

The tournament was held in Midland and the Bronchos defeated Wink 56-32 to clinch the title.

Another trip to the regional tournament was booked for Odessa High, this time the competition would take place in Marfa.

The Bronchos went on to face the El Paso Tigers again, falling by a close 24-23 score to end the season.

El Paso High again made it all the way to the state championship game and this time came away with a 29-20 victory over Abilene High.

After the basketball team finished its campaign, the Odessa High volleyball team made an impact of its own by collecting a district title.

The Bronchettes won the championship by defeating Rankin 15-0 and 15-13 in the district tournament finals.

Odessa High made it that far in the competition after picking up earlier wins over Kermit and Crane.

>> Aug. 29, 1946: Coleman is reintroduced at Odessa High after serving the U.S. Navy in the South Pacific and he says the Bronchos will start summer workouts immediately.

>> Dec. 29, 1946: It took no time for Coleman to get the Bronchos reunited with postseason success, as he led the team to its first state football championship by defeating San Antonio Jefferson 21-14 in Austin. The year before Coleman returned to Odessa High, the Bronchos won a district title and fell in the state quarterfinals against Wichita Falls.

>> Dec. 21, 1947: The 1947 postseason wasn’t as fruitful for the Bronchos, as they saw their campaign end in the state semifinals against Highland Park. Odessa High won the first two games of the postseason with ease, but they were halted with an 18-6 loss against the Scots at the Cotton Bowl in Dallas.

>> 1950: The Odessa High track and baseball teams achieved a feat that some schools take years to accomplish. Both programs won state championships within a 30-day period in May and June. The track team won the Class 2A state championship in Austin after a photo finish with Galveston Ball and Beaumont. The baseball team claimed its title after defeating Abilene High 2-1 in Austin.