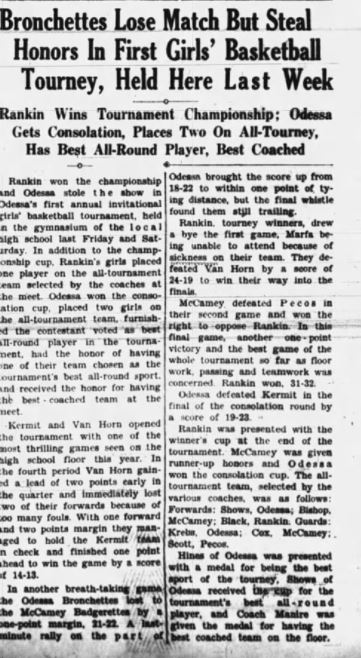 EDITOR’S NOTE: This is the second in a series of stories spotlighting the athletic achievements of ECISD athletes as the school district celebrates its 100th anniversary.

During the days of the Great Depression, the 1930s were filled with plenty of challenges for people across the country and around the world.

After Odessa High School saw a football program get established, programs such as volleyball and basketball, known then as “cagers” were also trying to get off the ground.

Also getting off the ground was the oil industry as the population of Odessa began to boom with the amount of oil being discovered in the area.

After football won three district championships in the 1920s, the 1930s saw a rotation of coaches including the arrival of one that would eventually lead the Bronchos to their greatest success on the gridiron.

That same coach would also be involved in one of the most important global events in history: Fighting in World War II in the United States Navy.

Here are some of the highlights of the decade filled with a tremendous amount of change.

>> September 1930: J.P. Donnell, Harve Mayfield and ECISD Superintedent Murry H. Fly were appointed to lead a committee to build permanent fields for both the Odessa High baseball and football teams. The facilities would also be built with involvement from the Chamber of Commerce and as the story indicated: “Such a park would be an asset to Odessa, as well as making it more easily possible for the interscholastic athletic contests to be self-supporting.”

>> October 10, 1930: The first Odessa High pep squad made its debut the previous Saturday during the team’s football game against Fort Stockton. The group was led by R. Henderson Shuffler.

>> 1932: The Odessa Junior Chamber of Commerce made plans to build a new sodded field and track in order to have a “presentable playing field by the fall football season.”

>> 1934: The Odessa High boys basketball team closed a strong season by finishing with an overall record of 20-7. Five Bronchos put together a strong starting core for the Bronchos including Jack Deere, John Krebs, Rolon Thomas, Billy Smith and team captain Slim Moore. The Bronchos had won 11 straight games at one point during the season before losing 15-12 to Big Lake in the district tournament. The team was led by Anthony Hunt.

>> Sept. 20, 1935: Lighted technology was being implemented all across the country and Odessa was no exception to that. The Bronchos were set to play their first ever night game in program history against Fort Stockton on a field that had just been fully sodded. It was also the first game under new head coach Brooks Conover.

>> 1938: The Odessa High Bronchettes won its first ever district title in school history by rallying to defeat McCamey in five sets. Calhoun of Odessa High led the way with 22 points over the matches during the day. The Bronchettes defeated Garden City in three sets to advance to the final. The team was led by head coach Bill Park.

>> 1938: Joe Coleman took over as the head coach of the Odessa High football program. The then 26-year old Coleman had recently been married that same year in Dallas. He had coached at Wellington in the Texas Panhandle prior to arriving in the Permian Basin. It was the first of two stints for Coleman. In his first season in 1938, he led the team to a 5-3-1 overall record and a co-district champion. He coached the team until 1941, when he joined the U.S. Navy as part of the war effort in World War II.