In May, Emmy Ulmschneide and I wrote an article about Gopher Plant.

In the last paragraph we stated:

“Wear gloves when pruning and touching any broken stems. This plant produces a white sap that can be toxic if ingested. Wash your hands after pruning.”

After the past week, I realize that we may not have gone into enough detail about the “toxic” part of that article. As a Master Gardener I have handled many plants, have no allergies and have been blessed by good health. So I was shocked when I found myself in a local Urgent Care center. Here is the story and, I hope, a lesson for us all. 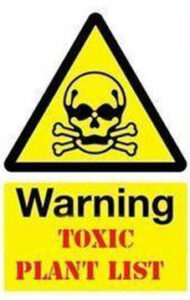 I was working in one of the gardens that Permian Basin Master Gardeners maintains. We were pulling weeds and doing general maintenance work. Most of the Gopher Plants in that garden had suffered damage to the stems during the hard winter freeze. The ends of a majority of the stems were yellow and needed cut back. Since I had been working a weedeater I wasn’t wearing gloves. Big mistake. Using hand clippers I began cutting the stems back. I was almost finished and noticed that one of the stems was oozing the white sap that we talked about in the article. I touched it with the tip of my finger and smelled it, wondering if it smelled bad since it was toxic. I’m pretty sure I touched my nose when I smelled it.

About ten minutes later I started feeling like something was in my eye. And, you guessed it, I put my finger in my eye to get it out. I was driving to lunch and within a few minutes was in intense pain and my eye was swelling and watering A LOT. My husband put me in the car and took me to Urgent Care.

The nurse called Poison Control and, following their instructions, started flushing my eye with water. The doctor checked to be sure nothing was in it (there wasn’t) and did his own flushing with saline. Eight hours later the pain started to go away. The next morning I woke up with a rash on both arms. I had loaded the clippings into my truck – again with no gloves or protection on my arms.

I knew better, I helped write the article. Another Master Gardener has a relative that lives in our area who had the same thing happen this summer-also with a Gopher Plant.

When a plant is toxic, please take the necessary protection. Don’t touch it without gloves on, wash your hands and sterilize the tools you use when working with them. If you have children who might be playing near a flowerbed, you may want to reconsider the plants that you put in that area. A little research goes a long way when adding plants to your yard.

For more information, call the AgriLife office at 498-4071 in Odessa or at 686-4700 in Midland or visit aggie-horticulture.tamu.edu or westtexasgardening.org.

MASTER GARDENERS: Native plants know how to survive and are the basis of our ecosystem

GARDENING: COVID-19 alert: Don’t forget to give your child a boost!