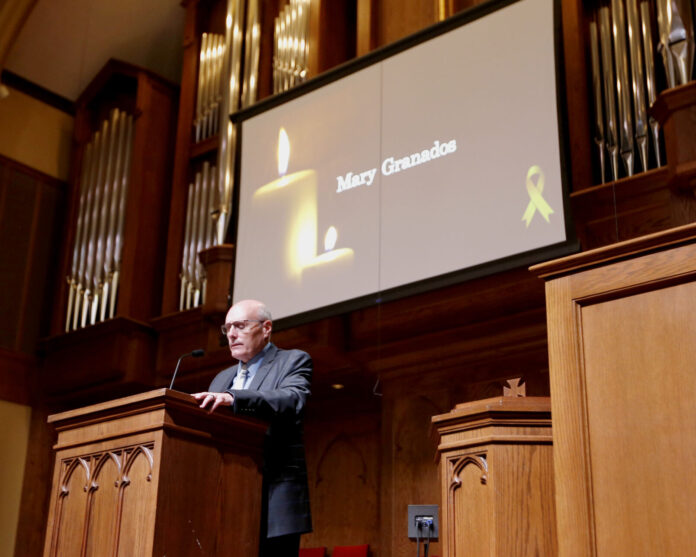 On the one year anniversary of the mass shooting in Odessa, First United Methodist Church Senior Pastor Jay Armstrong wanted to make sure that there was a way for people to come together — in person or otherwise.

The church hosted a community memorial service filled with prayers and music in downtown Odessa Monday that was streamed online and had a small crowd of in-person attendees.

The service reflected on the Aug. 31, 2019, mass shooting that left seven dead and injured 25 others and how the community can come together and heal from that tragedy.

“I wanted to give kind of a gift to the community,” Armstrong said following the service. “We have a lot of musical resources in the church and I really think that music has that opportunity to heal.

“It carries both our joys and sorrows at the same time and hopefully it leaves us with a sense of hope as well at the end.”

That message of hope was the prevailing theme from the prayers spoken by Armstrong along with Rev. Karin Carlson and Rev. Michael Shelton of Pilgrim Rest Missionary Baptist Church, who joined them for the service.

In her opening prayer, Carlson called for people to find the strength to come together amid the tragic events from a year ago. Her remarks were also followed by a prayer from Odessa City Councilwoman Peggy Dean and a piano piece played by Rev. Samuel Buhl of St. James Baptist Church.

“Will we be ever the same? No. Will we move forward? Absolutely by God’s strength and that’s where Odessa Strong comes in,” Carlson said during her opening prayer. “We have a divine strength that comes from God.

She said that she was there with the family at Medical Center Hospital as she was treated and her message was to remember those who died and care for each other.

“We’ve all been impacted,” Carlson said. “Today, may we remember how God has carried us and will continue to carry us through. That is the glory of God’s story.”

Carlson then lit candles placed in front of the church and Armstrong read the names of each of the seven victims who died followed by a single bell toll after each name was spoken.

As part of his prayer, Armstrong said: “Let them be for us a rallying cry to work for peace and to reject hate, to love our neighbors as ourselves and to tear down any barriers that keep us from that hope.”

David Corman, the musical director at First United Methodist, sang The Lord’s Prayer and led choir members at the conclusion of the service singing “The Majesty and Glory of Your Name.

He was also joined by his wife Kimberly, his 14-year old daughter Grace and son Jacob.

Corman echoed that message of peace and healing to a community that needed it more than ever.

“Outside of ourselves in our hour of music and prayer, we want to say that we don’t believe in violence,” Corman said. “We’re going to go another way. We’re going to preach peace, love, kindness, bravery and courage in the face of such things and nothing can tear that out of hearts.”

He also recalled performing in New York City following the Sept. 11 terrorist attacks at the Lincoln Center and said that unimportant things get pulled away when tragic events happen like that.

He said that music has that ability to bring people together and hopes that everyone — whether in-person or virtually — can find that connection with one another.

“We believe that as singers we are instruments in the light of God,” he said. “That’s our wish, our desire and our duty in the world to not be afraid. No matter what we look like, love conquers all.”

The message of love and healing was further echoed by Grace Corman.

“It was one of the most horrible days to happen to this town,” she said. “If you forget history, you’ll never learn from it and you can’t move forward from it. It’s good to know that you can learn from it, you can show others love as you go in life.”