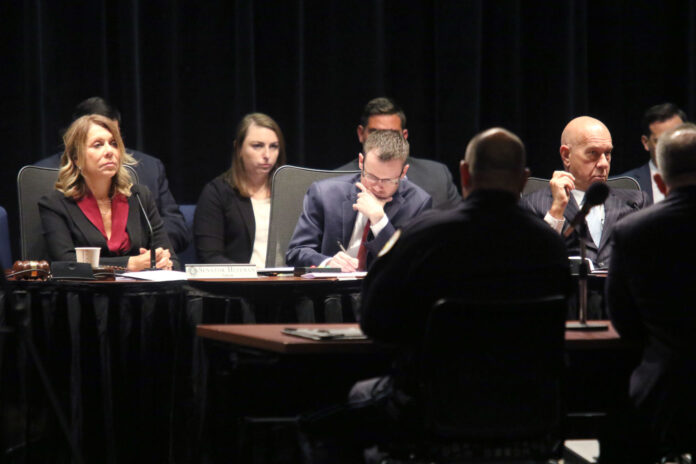 Nine Texas state senators struggled Thursday in Odessa to apply logic to the highly illogical crisis of mass shootings while Odessa’s mayor said publicly that there was a communications problem for law enforcement the day that seven people died and 25 others were wounded by a gunman in Odessa.

Calling Odessa Mayor David Turner and Midland Mayor Jerry Morales to the witness table in Deaderick Auditorium at Odessa College, the Senate Select Committee on Mass Violence Prevention & Community Safety explored questions including mental health monitoring, the removal of firearms from the possession of unstable people and the possible role of extremely violent video games and movies in the increasingly commonplace tragedies like the one Aug. 31 in Odessa and Midland.

Turner opened by calling the situation “a crisis of the heart” and attributing it in part to the removal of Bibles from public schools.

In response to a question from Republican Sen. Joan Huffman of Houston, Turner conceded that there was a communications problem during the shooting between the Texas Department of Public Safety and city and county law enforcement agencies because an upgrade in equipment had not been completed.

The mayor said he owns and uses an assault rifle like the gunman’s because it is “the most versatile hunting rifle you can have” and Democratic Sen. John Whitmire of Houston countered by saying the danger posed by the controversial rifles should negate their value to hunters.

Other witnesses to be called in the 2 p.m. hearing included Ector County Sheriff Mike Griffis and Odessa Police Chief Mike Gerke, after whom victims and their families were to be heard until about 7 p.m.

About 120 people listened as Sen. Kel Seliger, R-Amarillo, who represents Ector County in Austin, said the “senseless violence” here was unique in that the gunman “was mobile” and kept firing for about 60 minutes as he left 15 crime scenes.

Seth Ator drove around mostly Odessa Aug. 31 firing indiscriminately first from his car into passing vehicles and shopping plazas and later from a hijacked U.S. Postal Service mail truck. The terror lasted just about an hour before law enforcement shot him to death near Odessa’s Cinergy Theater.

Taking turns questioning the mayors, other participants were Whitmire, Jose Rodriguez of El Paso and Judith Zaffirini of Laredo and Republicans Donna Campbell of New Braunfels, Jane Nelson of Flower Mound and Charles Perry of Lubbock.

Turner said the Odessa-Midland shooter was well-known to local officers for his instability and violent tendencies, but the most that anyone could have done under current state laws would have been to hospitalize him for three days.

Morales agreed that the mental illness factor is especially problematic. “They stop taking their meds for two weeks and here we go,” he said, adding that more attention should be given to public school students because the troubled ones get worse as they mature.

Morales said the speed of the events 47 days ago had a confusing effect on many of the people involved as the shooter careened in a hijacked mail delivery truck to the rear of the Cinergy movie theater on the south side of Highway 191, where he was engaged and killed by officers.

Trying to evacuate the theater, Morales said, “The manager was shoving people out the door toward the shooter,” which indicates that business owners should be trained along with law enforcement and school personnel and children about what to do in such situations.

Turner said U.S. Sen. Ted Cruz told him after the shooting that it is a felony for prospective gun owners to lie in background checks, but federal authorities do not prosecute those who prevaricate. “It worries me that the feds can’t get it right,” he said.

In the weeks following the shootings in Odessa, news came out that Ator had a number of mental health issues and that he had threatened to end his life in a shootout with police in 2011 in Amarillo.

Officers in Amarillo, went to the home of  Ator’s mother in February 2011 after she told them he had refused to take his mental-health medication and had threatened to end his own life in a shootout with police, CNN reported in September.

They found a machete hidden in her son’s bed and an underground shelter he had dug in the backyard. In a recording the mother shared with police, her son declared, “911 will bow down before me.”

Police interpreted what they found as preparations for an attack and were so troubled that they recorded floor plans of the property and shared the information with the city’s SWAT team, according to incident reports.

Officers believed Ator was volatile and might hurt somebody someday.

The police incident reports raise new questions about whether more could have been done to prevent Ator’s shooting spree in the cities of Midland and Odessa, Texas. It’s unclear how Ator, who once failed a background check for an attempted firearm purchase, acquired the AR-15-style rifle he used in the attack.

“There seemed to be some indication of some planned standoff with police,” one of the responding officers wrote in a report following the 2011 encounter.

Another officer stated in an incident report at the time that he believed Ator “will attempt to harm the police and the public.”

After inspecting the home, officers transported Ator to a hospital and he was medicated and admitted to a mental health treatment facility, according to the report.

Police reports note that while in that facility Ator told security: “The police can’t be everywhere.” An officer stated: “I took this as a threat against the public.”

West of the Pecos Rodeo