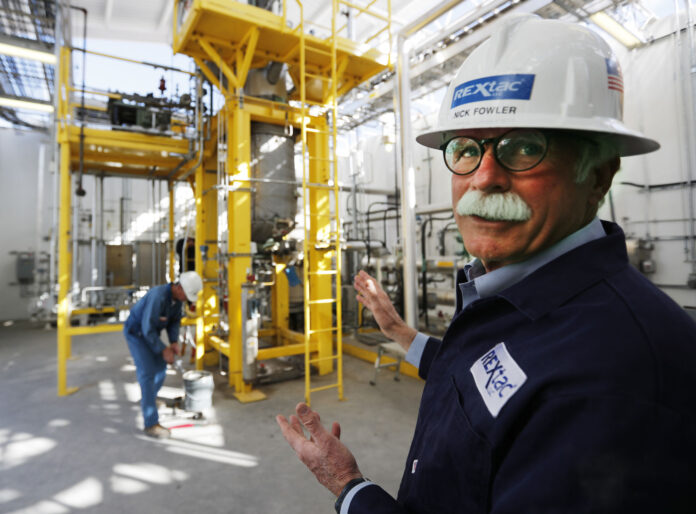 Instead, the owner of REXtac in Odessa is looking at his company’s long-term success.

Fowler wants the current 250 to 260 employees — split between REXtac and Orrex Plastics — to have a lifetime job at the company.

“If we just keep making what we are doing today, these people won’t have jobs in 10 years,” he said. “You have a choice and you are in business. I could take this money home, buy a jet and go the Rivera or I could build that pilot plant and after I’m long gone, people will still have a job.

The pilot plant allows REXtac to produce specific APAO for companies on a smaller scale. It has a 200-gallon reactor that’s capable of continuously producing up to 100 pounds an hour. Fowler said the APAO can be transported to companies in its molten state or hardened state in the form of nuggets or similar shape to a briquette.

“We built this pilot plant, so we could do research and development for new molecules,” Fowler said. “We spent a lot of money doing that. We started it up and it’s running. We want to develop new products that we haven’t developed before, so we can increase the capacity of this plant.”

Job security for his employees is imperative because of the constant boom and bust of Odessa.

In 1983, Fowler was subject to one of those busts. Fowler, who is an Odessa High graduate and earned a civil engineering degree from Rice University, worked as a drilling engineer.

When he was unemployed, Fowler began digging up APAO from a pit next to the current production facility and began selling it to a roofing company. The APAO was mixed with asphalt to form modified bitumen used in flat roofs.

At the time, APAO was a byproduct of the harder polypropylene. The company that previously owned the plant changed one of the reactors, so instead of that being a byproduct as waste and throwing it into a pit, they made it on purpose.

Though the company’s sustainability was a driving factor in building the pilot plant, Fowler said another influence was his ongoing paranoia that a company — other than his own — will make a better product.

Fowler said REXtac should be at the forefront of innovation of APAO. He said he believes the addition of the pilot plant will allow REXtac to do that.

“Someone is going to think of something better and it better be us.”

Andres Sustic, who is the director of research and development at REXtac, said the pilot plant also has the ability to change the mixture of compounds quicker than in the commercial plant.

“The transition from one product to another are much faster,” Sustic said. “From the volume side, it’s much smaller. This reactor makes about 15 to 20 times less (than the commercial reactor), so you can make the transitions between different products with much less waste.

“You can also make several transitions in a day where in the commercial plant, everything takes much longer.”

Enrico Buenacosa, the technical services manager at REXtac, said there are three plants that manufacture APAO. The two in the United States are Odessa and Longview, while the third is in Germany.

“It’s a big step where we can always use this pilot plant in development without costing a lot of money,” Buenacosa said.

Fowler said he believes with the team he has, the company will make a better product in the future.