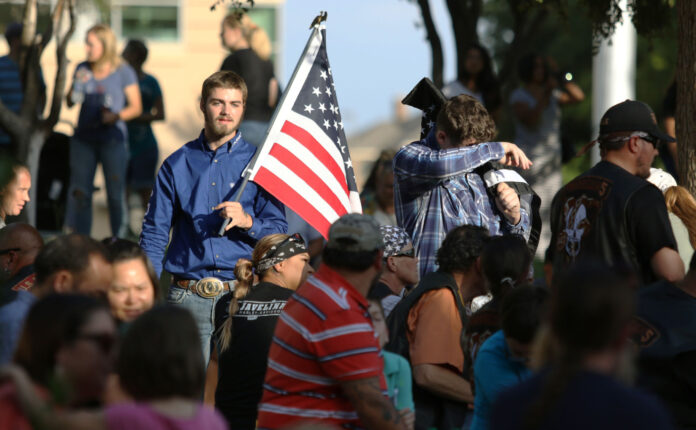 In response to the Aug. 31 mass shooting, a cross-section of the community has come together to form RISE Permian Basin.

RISE stands for recover, inspire, strengthen, endure, and is still a work in progress. Tracy Austin, leader of the group, is executive director of the American Red Cross, but this is not a Red Cross organization.

RISE began the week after the shooting, Austin said. The Red Cross responds to shootings like this one every time they happen in America, “so we know that resilience is a critical need of every community that’s had a mass shooting.”

“ Then we asked the question, ‘Who else needs to be here?’ and we made a list and invited everyone on that list to come and so it’s grown exponentially that way,” Austin said.

There is a steering committee of 10 to 12 people, sometimes more depending on the week. Then there is the full group, which is larger and meets once a month. With everyone, there are about 25 people involved, but if everyone attended, it would be about 35.

The purpose is to create a framework that supports a long-term commitment to promote healing and growth for the whole community, Austin said.

Mental health and spiritual care are two components that will be addressed.

“ But we’ll also be a clearinghouse for people who want to have events so that we can let the community know about them. We’ll have a website so that people can go to that website and find resources. We’re working on that actively right now. We hope to have a physical center set up. I can’t tell you a timeline, but we are looking at places for a physical resilience center,” Austin said.

“… We’ve seen the communities build what are called family … resiliency centers after the event. Those centers function in different ways for each community and they have different purposes in each community, depending on the event but it is standard to have a resilience response to any disaster. This is unique because this disaster was a mobile mass shooting,” Austin said.

“ Mass shootings are unique events and they bring out unique responses in the community and we want to make sure that we are responding to the needs of everyone in this community …,” she added.

The organization is working on building the framework to move forward in a way that will include the entire community in the healing process.

As events like the serial shooter, the Snapchat threats and incident at Permian High School take place, Austin said it reinforces the need for a resiliency center.

“ I’ll tell you what happens with me and I think the group agrees that we feel a sense of urgency that we need the center more than ever and the community needs the center and deserves it. We’re working very hard to make that happen as quickly as possible because every time something like that happens, it reminds us that we need it,” Austin said.

There are agencies within RISE that have Victims of Crime Act grants that run for two years.

“ Most grants are for two years, but that doesn’t mean we can’t fundraise to continue if we need to and we will should we need to. As an example, there are other events that have happened that you can look up online that have been several years ago and they still have their family resilience center many years later,” Austin said.

She cited Sandy Hook Elementary School in Newtown, Conn., where a mass shooting took place in 2012.

Each event that occurs in the community can re-traumatize people, she said.

The Rev. Dawn Weaks, co-pastor of Connection Christian Church, is on the committee and feels it is very important to have.

“ When a community experiences a brutally violent act like the one we are enduring, its effects are far reaching. Our work is to be proactive in helping our community heal and even grow from this trauma over the next months and years,” Weaks said.

Carrie Beyer, a student assistance services counselor for Ector County ISD, is part of the group as well.

Beyer said she thinks the community is still impacted by the shooting and the events following. When events keep occurring, Beyer said people should reach out for spiritual or mental health care.

“ I think everyone kind of has a sense of looking for safety … in the chaos. We have had events that continue the narrative of are we safe, are we not safe,” Beyer said.