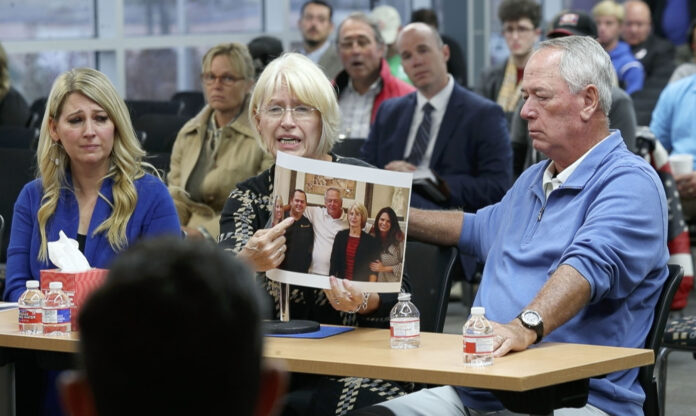 The sisters of one of Odessa’s Aug. 31 mass shooting victims Thursday called on a panel of state legislators to stop kowtowing to the National Rifle Association, show political courage and pass common sense gun sale reforms.

Carla Byrne and Marcy Askins, sisters of Joseph Bryan “Joe” Griffith, told the House Select Committee on Mass Violence Prevention & Community Safety that Griffith’s murderer should not have been able to buy a 5.56-millimeter AR-15 assault rifle surreptitiously in Lubbock after failing a federal background check.

“My brother was on his way on a peaceful Saturday afternoon to a family photo with his children and wife in the car and the next minute our whole town was in a virtual war zone,” she said. “The shooter should never, under any circumstances, have had possession of a gun. The Lubbock seller is covered in blood money and should be held accountable, but he won’t be because our system is broken.”

Byrne’s powerful testimony was moving as she spoke of her brother who was one of seven killed on Aug. 31 by gunman Seth Ator who drove around Odessa randomly shooting at motorists and others. Ator was shot and killed by law enforcement near Odessa’s Cinergy Theater but not before he also wounded 25. He shot Griffith to death in front of his two young children and wife.

“Joe was the father of two beautiful, smart and funny children, 11 and 13,” Byrne said, weeping. “Our last gathering was on Aug. 21 for my dad’s birthday. We laughed all night and I thank God for that last night. We didn’t know that 10 days later we were never to see him again. He was robbed of his life and his children were robbed and his wife was robbed of having him.”

Contending that universal background checks should be instituted, Byrne said, “I come to you today not asking you to be sad for us but to be angry for us.”

About 60 people attended the hearing – one of a series being held statewide by the House cluster and a Texas Senate committee from Austin that heard testimony here Oct. 17 — in the Joe Zant Community Room in the Saulsbury Conference Center at Odessa College.

Marcy Askins, Byrne’s and Griffith’s sister, said Seth Ator had given many indications that he might one day commit an atrocity. “This man was admitted to a mental institution and threw a chair out of a window trying to escape,” said Askins, a nurse practitioner at Midland Cardiac Clinic.

“He assaulted the person who was trying to help him. He was on his roof shooting innocent and defenseless animals and he brought a gun to a confrontation with his neighbor about trash. This is a man who bought a gun legally through a private sale who should have never been allowed a gun, let alone a gun of mass murder.”

Explaining that she is a conservative Republican whose husband belongs to the NRA, Askins said, “I’m not trying to take away your guns.

“I believe a good guy with a gun will stop a bad guy with a gun every single time, but I do not want crazy people to have access to guns. Why do people have to continue dying? If you don’t want your family murdered in the street, please do something so you won’t be singing ‘Happy Birthday’ to your dead brother’s grave.

“We are reasonable people as we know you are. Please do something so no more people have to die.”

Askins also referred to random shooter Troy Lee Wilson, who is charged with shooting or shooting at three people here Sept. 24 and then killing Juan Leonardo Rosalez two days later where Rosalez had stopped with car trouble at Business I-20 and FM 1936.

Calling for TV and text warnings like Amber Alerts for missing children, Askins said one of the main problems with both cases was that there was no general alert so that the public was immediately made aware of the danger.

Griffith’s father Gary said his 40-year-old son “was an honest man, the best who ever lived,” a graduate of Odessa High School and UTPB who had taught mathematics for eight years at Goddard Junior High in Midland and since 2012 had worked at B-Line Filter & Supply.

“Nobody knows until it hits home.”

Griffith’s mother Sharon said the legislators were “appointed by God for just such a time as this.

“The law failed us, but you have the chance to change it,” she said. “When the next mother sits before you, it’s going to be on you.”