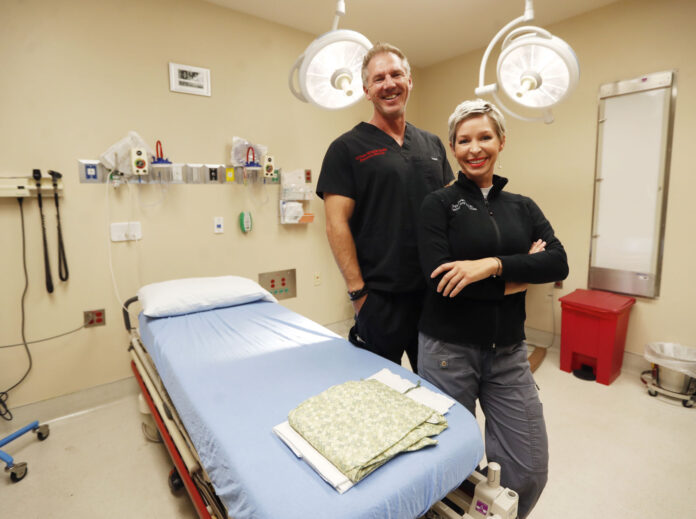 The first Dr. Jeff Pinnow knew of the Aug. 31 mass shooting in Odessa was when his wife, Dr. Olga Dowell, called him from Odessa Regional Medical Center to tell him he better put his scrubs on.

At the time, Pinnow, who is director for the family practice/emergency medicine fellowship at Medical Center Hospital, was about to mow the couple’s lawn.

The shooting killed seven and injured 25. The gunman, Seth Ator, 36, of Odessa, was killed by law enforcement outside the Cinergy movie theater off State Highway 191 between Odessa and Midland.

Dowell, who went through the fellowship program, is at ORMC. She said they never expected anything like that to happen in Odessa. She said you hear about it happening everywhere else, but it’s the last thing you expect in a small community like Odessa where “people know each other” and it’s usually pretty peaceful.

Dowell said quite a few patients were taken to ORMC by family car or law enforcement. Most of the ambulances, she said, went to Medical Center.

“We had pretty extensive training (at Medical Center), as far as the trauma; not mass casualties of course, but gunshots and trauma in general … so I was comfortable handling the situation like that,” Dowell said. “I knew what to do. I had a very good staff with me on that day, on that shift. With all those resources that we had, we were pretty well organized. I think we did a great job taking care of the patients, but I can tell you the ER fellowship prepared me for (these) type of injuries for sure.”

She said she was the only ER physician on that day, but there were other nurses and staff on duty during the long Labor Day weekend. In a short period of time, they called additional nurses to come to the ER, called a trauma code, a general surgeon and activated ICU beds. All together, there were about 30 people on hand, Dowell said.

Those first few moments, they were in shock.

“Within 10 minutes, we got pretty organized,” Dowell said. With emergency room training, you have to pool resources and do what’s best for the patient to make sure they survive.

“… It didn’t surprise me when the two victims came in here with gunshot wounds to the chest that Dr. Dowell knew exactly what to do because that’s how we train. In terms of mass casualty itself, we usually run annual drills at Medical Center, specifically for mass casualty, and I do make sure that the fellows are involved when we do those drills so at least they have some exposure to how it’s supposed to run,” Pinnow said.

As part of their training, ER fellows log 100 hours of EMS, so they spend 100 hours with Odessa Fire and Rescue.

But Dowell, who is from the Czech Republic, notes a drill is different than a real situation.

“When it’s real, it’s real. Your adrenalin goes over the roof. I think all the resources that your body has, which is like you feel it in your chest and you know what to do. Your mind is so concentrated, you know exactly what to do,” Dowell said.

Dowell said she didn’t feel like she had to do everything herself, but said it was like being the captain of a ship where she had to lead the team and make sure they knew what to do.

“I had to shout across the room so the nurses could hear me or be animated,” she said. But everyone figured out their roles and worked together as a team.

There were hospital and department debriefings and a trauma committee meeting.

“I think from now on we’re going to have the mass casualty drills because even if ORMC is not Level 2 trauma center, but a situation like this shows that the patients still come in. Even during the year when it’s not mass shooting, we still see those random cases where a trauma patient comes in by private vehicle. We have to be prepared for it,” Dowell said.

She said hospital administration and her husband were very supportive.

“I quite a lot ask him for support. We sat down after that and we were venting to each what happened at his place and at my place, how we should have handled the situation, what did we do right or wrong, what’s the best thing to do for the patient the next time that something happens,” Dowell said.

Pinnow said he thought she did a fantastic job.

“What I can say is I don’t know of many other … ERs outside of Medical Center where a patient could walk in with an open chest wound and urgently get intubated and stabilized and have the chest tube placed and the lung re-inflated all within 10 minutes’ time,” Pinnow said.

“… From the fellowship perspective, there’s lessons to be learned here as well in terms of how we all have to be prepared for mass casualty now. It’s not just an urban problem. It’s not just a big city problem and so that gives me pause to make me reflect upon the curriculum and see how do we get some more mass casualty training,” Pinnow said.

Pinnow said ORMC should probably be invited to participate in more of the mass casualty drills that involve OFR, the Odessa Police Department and Medical Center.

Over the last two years, Dowell said the culture at ORMC has changed. In the past, ER doctors came from somewhere else so there was no local corps. Recently, though, the hospital has added more services, has more patients and more ICU beds.

With Odessa and Midland seeing more people come into the area for the oil and gas industry, Dowell said she thinks the crime level is going to get worse.

“… I think we need to be more prepared. I think the training as the fellowship offers is fantastic we definitely need it for this area (and) for the rural area …,” she said.

Pinnow and Dowell have been married a little more than a year and have four children together.

Dr. Rohith Saravanan, chief medical officer at ORMC, said he was in Austin when he heard about the shooting. His first thought was that he wanted to be at the hospital supporting his staff and the patients.

“But long story short, we were able to put together a response that was very meaningful for the community and it was able to address the need at the time. There’s a lot we could do differently and better and we will from next time onwards, if there’s ever a next time. I hope there isn’t, but we’re more prepared than we were before,” Saravanan said.

“We’re still preparing and getting the educational needs and incident command type of needs, emergency preparedness courses, more personnel that know how to do this rather than just a few people who are trying to manage it remotely over the phone …” he added.

His biggest concern at the time was how he was going to manage the situation remotely.

“I think we did an overall good job of being able to set up that remote incident command, (being) able to communicate through our secure text messaging system, being able to do the lockdown and manage staffing appropriately to make sure that we could respond to what was showing up at our door,” Saravanan said.

“We saw six patients here from that incident and four of those patients we discharged directly from the ER. Two of those patients we admitted to the hospital. Obviously, they are now recovered and discharged, as well, but at the time when things happened the biggest challenge for us wasn’t that we didn’t have enough capacity to handle what was coming in to us it was more managing the capacity that we did have,” he added.

He said the staff was happy to show up at the ER, but there weren’t enough people telling them what to do. A better incident command system also is needed so personnel can be dispatched to the ER.

He noted that there are administrators on call, but many were out of town for the long holiday weekend. The ones that were available were at the hospital and took care of things.

“But the majority of the executive team was out of town, which is one of our reasons for not having a huge presence in the media during that event when Medical Center was right there and was able to give updates,” Saravanan said.

ORMC is a Level IV trauma center, so most gunshot wound victims go to MCH. Saravanan said the hospital doesn’t intend to go for a higher trauma level designation, but it can provide a high level of service.

“… We’ll let Medical Center Hospital be that trauma center that’s the hub locally. We’ll support them in any way we need to. We transported our upper level traumas to them, even if they show up to our door so we’re happy to partner with them in that way,” Saravanan said.

Following the shooting, Saravanan said support was offered by administration and staff was debriefed.

“We’ve had multiple debriefing sessions, both individually and in group settings, for them to be able to talk about what happened, get feedback on what could have been done better and also dealing with whatever emotions they have … left over from all of that,” he said. “We’ve also worked with the City of Odessa to allow our staff to tap into some of the resources that were set up by Red Cross and the other organizations locally that volunteered their trauma counselors, as well, so we made all of that available …,” he said.

More training in emergency preparedness training is occurring and is upcoming.

In the past, they would do generic emergency preparedness drills.

“But now we’re going to start doing very event specific drills,” such as what happens if an active shooter is inside or outside the hospital, Saravanan said.

“Those are the kind of drills that we usually will not do. We do a lot of roundtable discussions, but we haven’t done those drills before. Now we’ll do more of those. It’s about consistently and repetitively doing those so that we can prepare well,” he added.