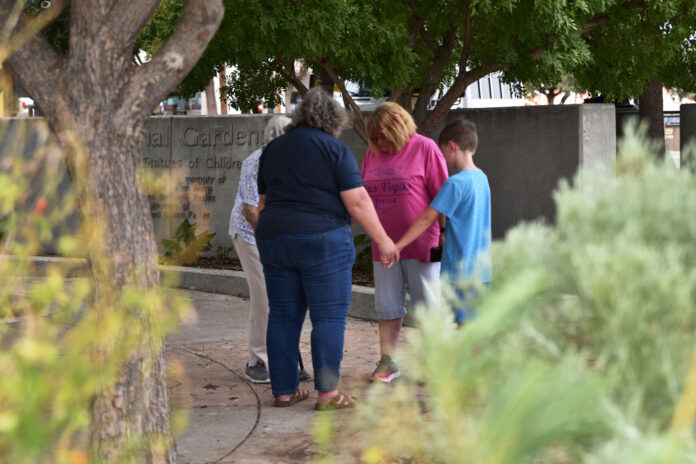 Before the City of Odessa held its moment of silence to remember the 32 people who were killed and injured in last year’s mass shooting, the quartet of June Davison, Cindy McCrohan, Eva Lee Davison and Mason Freels joined hands in prayer.

McCrohan talked about the events she experienced a year ago as she was one of the people evacuated from Cinergy Theater. She said it’s important to remember the countless families that were affected by the mass shooting.

“I feel like it’s a privilege to come back and be able to share in prayer,” McCrohan said.

“To be able to pray for the people who lost loved ones and more or less be there for them whether they know we are or not.”

McCrohan explained that she and her husband and her granddaughter were evacuated from the movie theater they heard gunshots as they were walking toward their vehicle in the parking lot.

The gunshots McCrohan heard were multiple law enforcement agencies shooting and killing 36-year-old gunman Seth Aaron Ator. McCrohan said where she and her family were on the opposite end of the building where the gunfire took place.

“We walked over to Bahama Buck’s and they let us in the back and that’s where we stayed,” McCrohan said.

At Memorial Gardens, the City of Odessa put up yellow flags that detailed with Odessa Strong.

Tryann Stevenson, 30, walked around the park and said he came to pay his respects. He explained that he could have easily been traveling on the roadways that Ator was rampaging through as he killed seven people and injured 25 others with an AR-style rifle that he obtained through a private seller.

“It’s eye-opening,” Stevenson said. “It makes you want to sit down and appreciate life. You never know how much of it is guaranteed.”

More than 20 employees of the Southwest Bank branch near the intersection of 42nd Street and JBS Parkway gathered outside the building for prayer and the 32 seconds of silence.

Dewey Bryant, CEO of SouthWest Bank and District 2 council member, said the mass shooting continues to affect many Odessans and he hopes the community can continue to heal those wounds.

“There are things that you continue to remember,” Bryant said. “We had a horrible event a year ago. Those things will always be part of your mind and I hope so, because they help us reflect as we move forward and become stronger as a community.”