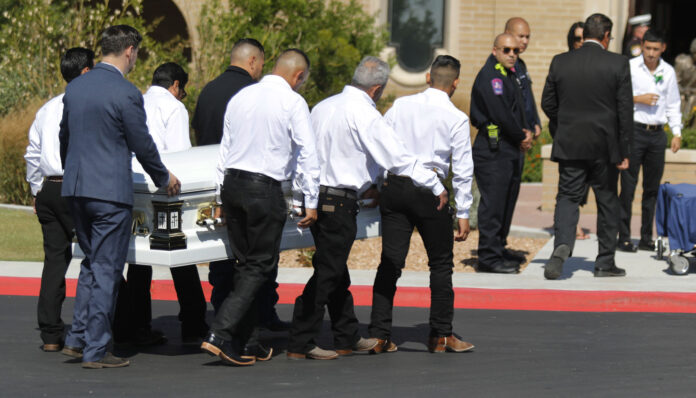 A full sanctuary of mourners gathered at St. Elizabeth Ann Seton Church Friday to pay final respects to Leilah Hernandez, a 15-year-old Odessa High School sophomore who was one of seven people killed Aug. 31 in a mass shooting.

The Mass of Christian Burial was conducted in English and Spanish and featured the Mariachi Broncho group and a joint effort of choir singers from St. Elizabeth’s and Holy Redeemer in Odessa and St. Ann’s in Midland who came together to sing for the mass.

Some of those attending wore T-shirts with Hernandez’s No. 23 basketball number on them and others adorned with her photo.

“We come here with pain in our hearts. We come here sorrowful for what has happened,” sorrowful for family and friends, and also because Hernandez is no longer “with us the way she was,” Fr. Timothy Hayter said.

He said fear, hurt and anger about the mass murder does not have to be the last word.

“There is nothing that can take away the good that Leilah is,” Hayter said.

He added that he said that because Hernandez is with them in a different way now. Hayter described Hernandez was very shy growing up, yet she loved her family. He said her family was her world.

She was very respectful to her parents and everyone. She liked to wrestle with her brothers and stepfather and always touched base with her father on the phone, he said.

“We see a girl that was not always asking to go out. She was perfectly fine and content to be with her family,” Hayter said.

In middle school, Hernandez took to sports, which Hayter said was tough for her but she did well. When she didn’t make the volleyball team, she found basketball.

“She was so loving; very kind funny; always said hi to people in the hallways; always nice; never talked bad on anyone,” Trinity McCormick said.

“She never had a bad day, honestly,” Aleena McCormick said. “It was a never a bad day with her. Sometimes she would be down, but she never showed it.”

Mackenzie Guzman, also a PHS sophomore, said she only talked to Hernandez once, but she was extremely nice.

“And she made an impact,” Guzman said.

Guzman said she attended the service, “Because nobody should have their life taken away from them that early and I feel that … I didn’t know her very well, but it was still very responsible of me to come and say my condolences to her family.”