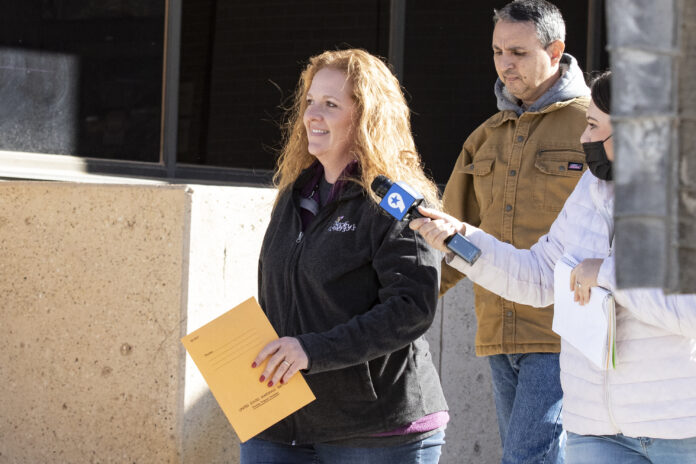 Two Midlanders were charged Wednesday afternoon with two federal misdemeanors in connection to the Capitol riots a week ago.
Jenny Louise Cudd and Eliel Rosa were each charged with knowingly entering or remaining in any restricted building or grounds without lawful entry, a class A misdemeanor, and violent entry and disorderly conduct on Capitol grounds, a class B misdemeanor.
The two were seen by U.S. Magistrate Judge Ronald Griffin on Wednesday afternoon at the Texas Western District Court in Midland. Cudd and Rosa were each arrested by the FBI early that morning.
Cudd and Rosa were each given a Personal Recognizance Bond for the two federal misdemeanors and less than an hour after being charged they walked out of the front door of the courthouse.
Members of the local media asked Cudd and Rosa questions, but neither answered. Cudd smiled and waved as the car that was being operated by Rosa drove out of the visitor’s parking lot of the courthouse.
The class A misdemeanor would carry up to a year in federal prison, up to a $100,000 fine and up to a year of supervised release plus a $25 assessment. The class B misdemeanor would be up to six months in federal prison and up to a $5,000 fine plus a $25 assessment.
Cudd and Rosa each spoke to Griffin throughout court proceedings. Cudd’s attorneys attended the initial appearance via Zoom. The attorneys representing Cudd were Donald H. Flanary III from San Antonio and Marina Medvin from Alexandria, Va.
Rosa didn’t have legal representation as he detailed to Judge Griffin that he hasn’t had a job since he moved to the United States four and a half years ago. Rosa said he came to the United States seeking asylum from Brazil.
Judge Griffin told Cudd and Rosa that they will both have another hearing next Thursday via Zoom with a judge in the District of Columbia. Cudd and Rosa were each given a probable cause affidavit but Judge Griffin said that the document has been sealed by a judge in the District of Columbia and that he wants that judge to release the information.
Cudd spoke with the Odessa American on Jan. 7 after video and pictures surfaced of the former Midland mayoral candidate in the Capitol Building. Cudd told the Odessa American during that interview that she followed a couple people going up the stairs and there was a door that was open that people were going in and that’s how she got inside.
Cudd was also asked by the Odessa American if she was worried about the FBI to which she replied she wasn’t “because I know I didn’t break the law,” Cudd said. “I know there are plenty of people in Midland and Odessa that have already turned me in to the FBI. When the FBI calls, I will talk to them.”
In the week that followed the Capitol riots, Cudd deleted her personal and mayoral Facebook accounts.