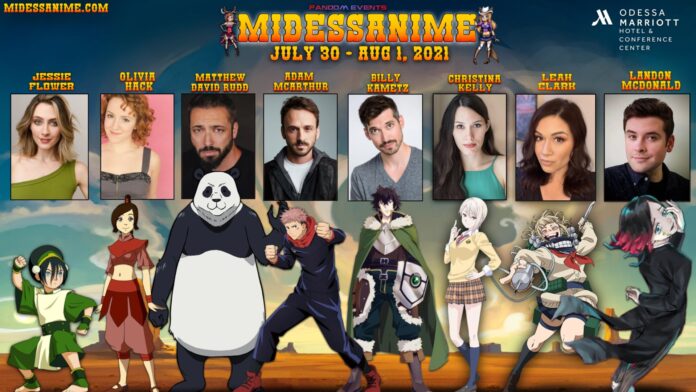 After last year’s event was canceled, owner of Fandom Events and Odessa Anime Josh Wilson is excited to see Midessanime take place in person this year.

Midessanime, which is an anime convention, will take place from July 30-Aug. 1 at the Odessa Marriott Hotel and Convention Center, located at 305 E. 5th street.

This will be the inaugural year for the event.

The inaugural Midessanime was originally supposed to take place last summer but due to COVID-19 restrictions, the in-person convention was canceled.

“We are absolutely thrilled to be putting on an in-person convention,” Wilson said. “Midessanime is scheduled to be the largest anime convention ever held outside of a major metropolis area in Texas. We’re honored to have that privilege of doing it in the Permian Basin. Last year, we had everything ready to go but then had to postpone due to COVID, which was the right thing to do. But now that everything is opened and people are vaccinated, we feel confident that this would be fine for an in person convention.”

The convention will have a number of celebrity guest actors from anime shows and films.

Some of the announced guests will include Jessie Flower (who does the voice of Toph from Avatar: The Last Airbender) and Leah Clark (who does Toga from My Hero Academia), Adam McArthur (who voices Itadori from Jujutsu Kaisen) and Matthew David Rudd, who is also from Jujutsu Kaisen.

“We have a number of guest actors that will be coming,” Wilson said. “They’re in some of the top-rated shows in the country. We have three from the top anime show in the world right now and that’s Jujutsu Kaisen. We have Matthew David Rudd who plays one of the main characters in the show and the lead of the show is Adam McArthur. He plays the protagonist. It won the anime of the year a couple of months ago. We also have another actor in that show. His name is Landon McDonald. He’s an actor that’s well known. He’s also the lead villain in the Demon Slayer: Mugen Train which was the top-anime moving in the country for a time. All of our actors that we have coming have resumes that are pretty impressive.”

There will also be some local talent that will be present including voice actress Christina Kelly from Midland who, among her many characters, does Mine from Akame Ga Kill.

“Kelly (also) plays Alice from Food Wars which is a popular anime series,” Wilson said. “And then we have Billy Kametz who’s in Jojo’s Bizarre Adventure. That fan base is wild. It’s a very popular show.”

Wilson says they are fortunate to have Kelly there.

“There are other celebrities that are local but once they make it big, they move to Houston or Dallas because that’s where the big recording studios are,” Wilson said. “But once COVID hit, it showed that you can record from home if they have the right set up. They’ve made it work. They’ve had to.”

As far as the other actors and actresses, Wilson says it is exciting to bring the amount of talent to the Permian Basin.

“They’re phenomenal and very excited to be traveling to Texas,” Wilson said. “For some of them, it’ll be their first time out in West Texas.”

The convention will also include Tea Team Cosplay, Take On eImprove and Neko Neko Maid Café and Host Club.

The convention will also include Q and A panels.

“Those are always fun because you can ask the celebrities about their favorite roles and stuff like that,” Wilson said.

The convention will provide programming from around 10 a.m. to 2 a.m.

Wilson recommends people to stay at the hotel for the weekend.

“There’s something to do all the time,” Wilson said. “That’s why we recommend stay at the hotel because this is not a comic con where people come and go. People here the word anime con and they think it’s the same but it’s more of a retreat. You get here and you don’t see the sun for three days. There’s something to do constantly. We’re happy to work with the Odessa Marriott. Visit Odessa has also been great to work with too.”

With this year’s event taking place at long last, Wilson is eager to see it take place.

“I’ve been in the convention business for almost 10 years now and one of the common questions we get from out of towners is that this is an insane guest list for any convention like Houston or Dallas, let alone Odessa,” Wilson said. “And they’ll ask ‘why are they coming to Odessa?’ and the short answer is we invited them. Typically, to get to meet this type of caliber of actors, you have to drive to Dallas or Houston to meet them. It’s great to see a show in our part of Texas that’s the same star power and the same type of programming as in other places and to have it here. There are anime fans in West Texas. There’s thousands of us out here. If there’s one locally, they’ll give it a shot. People will come out and check out an anime convention. Those people will come back.”