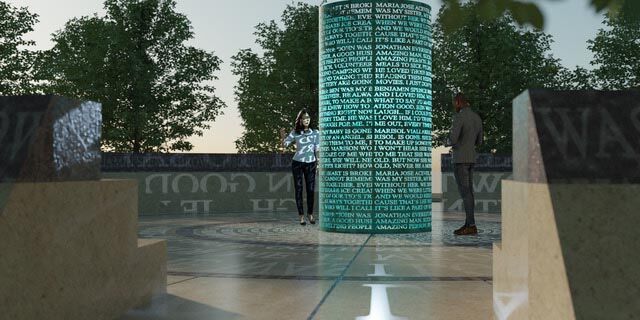 The University of Texas Permian Basin plans to celebrate its 50th anniversary in 2023 by creating a plaza at the corner of JBS Parkway and 42nd Street that they hope will house a proposed 10-foot circular art piece that would pay tribute to Odessa victims of a 2019 mass shooting, said Tatum Hubbard, chief of staff – executive director of communication and marketing for UTPB.

“As part of the celebration, we have plans to create a plaza … for the whole community to enjoy,” Hubbard said on Wednesday. “The end goal will be a place where community members can park, sit, reflect and enjoy our beautiful campus.”

The proposed project would be a collaboration between the City of Odessa, Odessa Arts and UTPB. City Council, which has expressed support for the project, is expected to vote on the proposal during their Tuesday council meeting.

Officials are still discussing several details, which include whether to construct new parking on the JBS Parkway or 42nd Street side, Odessa Arts Executive Director Randy Ham told council during their Tuesday virtual work session.

Once the project receives the green-light from the city, design staff will begin more closely looking at the parking situation, Hubbard said.

For the memorial to be installed, a cattle and horseman statue will need to be relocated to a different campus site, Hubbard said. That new location has not yet been determined.

The memorial piece will cost $300,000, Ham said. The project is being paid for by private donations, of which $190,000 has already been raised. Market Street has done a number of fundraisers as well as making donations to the memorial.

The memorial would include the names of all 7 victims, and engraved quotes from their family members, Ham said.

Maryland sculptor Jim Sanborn has been commissioned to create Odessa’s memorial to commemorate the victims of the 2019 mass shooting.

The Aug. 31 Memorial Committee selected Sanborn’s design “Bright Stars — A Memorial” from a field of three finalists. Sanborn, whose works include the encrypted Kryptos sculpture at CIA headquarters in Langley, Virginia, was one of 138 artists who applied for the commission via publicartist.org.

“I really hope dearly the piece works the way I hope it will work and will memorialize all the people involved in a sensitive way,” Sanborn previously told the OA.

Seven people were killed and another 25 injured during a mass shooting spree by gunman Seth Ator. Ator was killed after his hour-long rampage in a shootout with area law enforcement agents in a field near Odessa’s Cinergy Theatre.