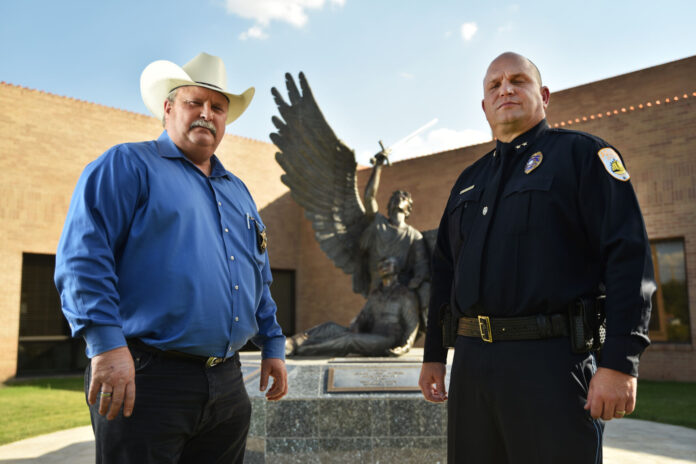 Odessa Police Department Chief Michael Gerke said he believes that a year ago law enforcement agencies around the country woke up to the fact that mobile mass shooting situations are a real possibility.

On Aug. 31, 2019, Odessa’s mass shooting lasted nearly an hour and spanned from Interstate 20 in Midland County throughout Odessa and ended near Odessa’s Cinergy Theater on Highway 191.

Gerke said over the phone that since Odessa’s mass shooting there’s limited training for a mobile active shooter, but he did say that training is in the works.

“This was a very unique situation that hadn’t really happened before,” Gerke said. “We reinforced the training that every officer gets with the active shooter.

“At the command level, we’ve dealt with clarifying roles and clarifying the thought process that when things like this go mobile that we have to do A, B and C.”

Ector County Sheriff Mike Griffis said over the phone that it’s tough for any law enforcement agency to be prepared for a mobile mass shooter.

However, Griffis said he believes the sheriff’s office took another step in preparing for another catastrophic event after the Ector County Commissioners approved Griffis’ request for 27 new Chevrolet Tahoes during its annually scheduled budget meeting on Aug. 11. Griffis said the addition of those Tahoes would give every deputy the ability to take home their patrol unit.

“You can do all the training you want, but until that situation occurs and you have to address that exact situation, each and every situation is different,” Griffis said.

Seth Ator, a 36-year-old man who lived in West Odessa, killed seven people and injured 25 others during his nearly hour-long rampage that began after Texas Department of Public Safety Trooper Chuck Pryor pulled him over for failure to signal.

Gerke said OPD officers have been trained in active shooter situations, but he said Ator’s case presented different challenges as he was mobile in a gold-colored Toyota Camry before killing a United States Postal Service employee for her mail van. Gerke said he was pleased with law enforcement agencies’ ability to track down Ator as a mobile mass shooter that operated multiple vehicles.

“When you look at the ability to track down and end the threat, we would have absolutely loved to end it sooner,” Gerke said. “But the first aid that the officers gave, the help they provided for the injured and they were able to stop the threat, I thought they did an excellent job that day. I’m nothing but proud of the job they did that day.”

After Odessa’s mass shooting, LeSueur said the department received Critical Incident Stress Debriefing, which he explained isn’t exactly counseling but an opportunity for more training and to talk about everything that happened.

ECSO spokesperson Charlie Veach said a number of deputies attended active shooter training prior to the mass shooting. He explained that more deputies are scheduled to receive additional training, but haven’t due to the coronavirus.

“After the shooting, we were going to get our guys into some training, but all of the training classes have been put on hold until after the coronavirus,” Veach said. “We don’t have anything new to give our guys, because we haven’t been able to send them to any new training classes.”