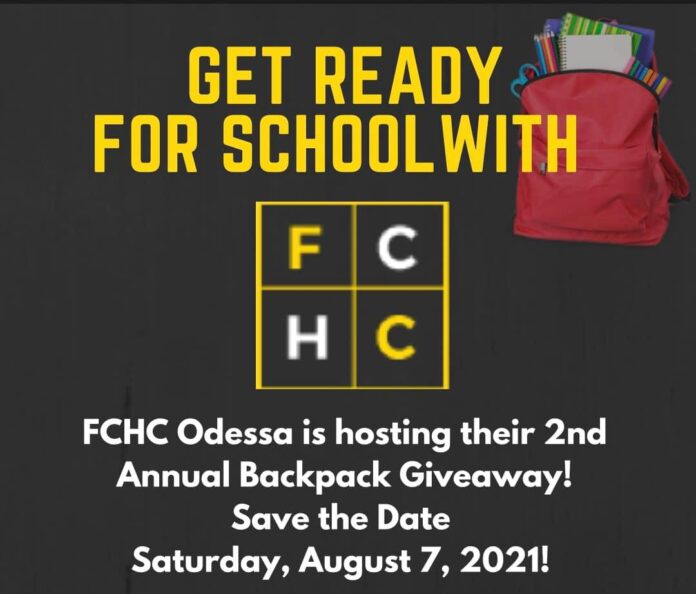 After last year’s Backpack Giveaway was scaled down due to the pandemic, this year’s annual event, which is put on by the Fadduol Cluff, Hardy and Conaway law firm, will be held in less-restricted settings.

FCHC will be giving away 500 backpacks. Each child will be able to build their own backpack with school supplies provided by the law firm.

The event is free to the community and is on a first-come, first-serve basis.

Case manager and marketing coordinator at FCHC Crystal Miller said that last year’s inaugural event was only in a drive-thru setting due to restrictions from COVID and they only gave away 400 backpacks.

“We had them drive through and gave them some masks and hand sanitizers,” Miller said of last year’s event. “It was a good turnout but it wasn’t as big as we wanted it to be because everyone had to stay in their cars.”

With restrictions being lifted this year and some things getting back to normal, Miller said it was a better idea to have kids fill their own backpacks with supplies that will be provided.

“It’s still a backpack giveaway, however, this year we’re calling it build a backpack,” Miller said. “We’re actually letting the kids build their own backpacks. Our vision is that we’re letting the kids show up, get out of their vehicles, and pick a backpack. We have 14 different designs of backpacks, raging from Disney characters up to clear and mesh. They’re going to pick their backpacks out and we’re going to have bins of school supplies that have been provided by the FCHC. They’ll get to pick their own crowns and own markers and their map colors.”

The event will also include Curb Side Bistro that will grill hotdogs and Kona Ice will be handing out snow cones.

“When they’re done (building their own backpacks), they get a bracelet that’ll allow them to get their own hot dog and snow cone,” Miller said. “We will have curb side bistro that’ll be participating and Kona Ice will be giving out the snow cone.”

B93 will be out playing music as well and there will be a drawing for a Dallas Cowboys preseason game.

Miller says that FCHC hopes to stress how important the community is to them by putting on this year’s backpack giveaway.

“With our law firm, we care about the community and anything that we can do to help, specifically with kids in need,” Miller said. “We hope people appreciate what we’re doing and hope that people can show up and bring their kids.”

Attorney at FCHC, Manuel Hernandez says they wanted to help out more this year with the COVID restrictions lifted.

“Last year was different for everybody and putting on events was no different,” Hernandez said. “We felt like we needed to try to do more to provide some direct help and relief for the community. Building off of that this year, with fewer restrictions, we figured what better way to help some more people and give them something to do. Not only give them a place to pick up a backpack but to pick up some snow cones and make a day out of it.”

Hernandez also praised the other businesses in the community, including Curb Side Bistro, B93 and Kona Ice for helping out.

“We’re happy and excited to have partners in the community,” Hernandez said. “We’ve been excited and blessed to help with events like with Chef Alejandro Barrientos at Curb Side Bistro like when he has his thanksgiving meal. He’s returning the favor and helping us out in our efforts. It feels good to be embraced by the community.”