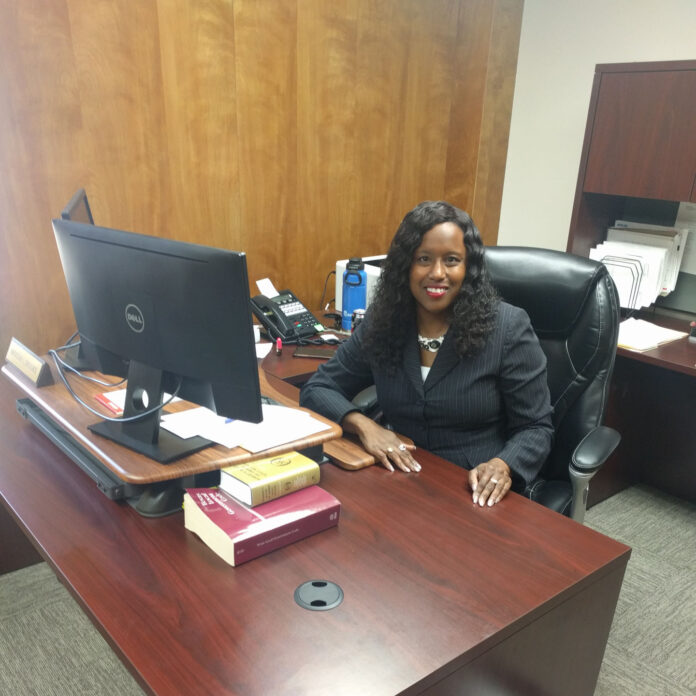 Natasha Brooks, an assistant city attorney for the city of Odessa, was appointed as the new city attorney last Tuesday, and began her work Wednesday, fulfilling a lifelong dream of hers.

“I’m happy to be city attorney but I know there is a lot of hard work and so I’m just ready to dive into all the work that we have to continue doing,” Brooks said.

Before she takes over fully, Brooks said Interim City Attorney Gary Landers will be sticking around for another month to go over priorities and help her transition into the role. Landers has been in the interim role for about a year and a half now, after former City Attorney Larry Long retired in February of 2018 following a sexual harassment complaint filed against him.

Brooks said she has always wanted to be a city attorney, which is the reason why she jumped from the City of Midland to the City of Odessa, and has spent her entire career practicing municipal law.

“When I grew up, my dad was a city councilman and a county commissioner, so very early in life I met the city attorney of Midland and I always admired him,” Brooks said. “He was my role model, and so I just knew that’s what I wanted to do.”

Ever since Long’s retirement, Brooks said she was planning to apply for the job, and said she’s ready for the challenge it brings.

“I’m excited to solve some of the cities’ problems if we have any or just move us forward in the right direction,” Brooks said.

Brooks said some of her focus as city attorney will be to update some older policies and procedures that have not been updated, and focus on public information, working with the city’s public information request software to where the city is responding effectively and efficiently to open records requests.

Outside of her job, Brooks also services on the Local bar Services Committee. She is also a member of the Texas City Attorney’s Association, a past member of the State Bar Unauthorized Practice of Law committee, and was formerly president of the Ector County Bar Association.

As a senior assistant city attorney, Brooks said she was earning $118,000 a year. She said she doesn’t know yet what her salary will be as city attorney, as her data forms haven’t gone through human resources yet.

Mayor David Turner said Brooks was selected out of four candidates considered, but couldn’t remember who the other candidates were, and said the applicant information was given to the city secretary to be shredded. He said some of the candidates didn’t want their employer to know they were looking for another job. A public information request was sent in for the names of the other applicants, which is always public record regardless of “shredding.” Brooks said she knew one applicant was Aaron Leal, who is the city attorney of Denton.

Turner said Brooks was picked due to her previous experience working with the city and that the full list of applicants will be available to the OA this week.

“She knows everything that’s going on,” Turner said. “She’s worked with [Odessa Development Corporation], she’s worked with many of the departments. And the city at this point, we just feel like that was the best choice.”

District 2 Council Member Dewey Bryant similarly said Brooks’ experience with the city was a benefit to him.

“She wanted to be there even more so,” Bryant said. “That plus the fact that she’s very familiar with the personnel, the way operations run–all those various, different things that in my mind allow you to hit the ground running because of your familiarity with systems and personnel and programs.

Landers said he thinks Brooks will be up to the task of city attorney, and said he thinks this is an exciting time for the city, due to this coming at the same time as many big infrastructure projects and a larger city council.

Rising above: Bowie changing culture a step at a time