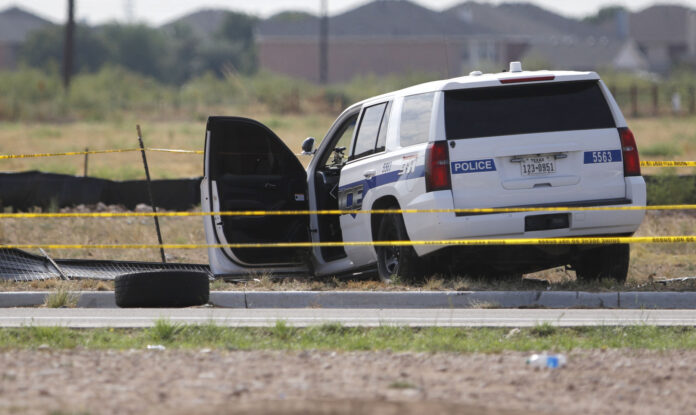 The 36-year-old gunman who killed 7 people and injured 25 others Saturday in Odessa obtained his AR-style rile through a private sale, which allowed him to evade a federal background check that previously blocked him from getting a firearm.

A law enforcement official reportedly spoke to the Associated Press Tuesday on condition of anonymity because the person wasn’t authorized to discuss an ongoing investigation. The OA confirmed through a different source that the gun was purchased in Texas illegally and that the gunman, Seth Ator, drove several hours from Odessa to obtain the gun.

Ator was fired from his job on Saturday and then called both 911 and the FBI to ramble about “atrocities” committed against him. He did not make any threats during those calls, but encountered a Texas Department of Public Safety trooper who pulled him over for a minor traffic infraction. Ator shot DPS Trooper Chuck Pryor and then drove around northeast Odessa randomly shooting motorists and some who were standing in their yards or at businesses.

Ramos didn’t say what law enforcement agencies found inside Ator’s West Odessa property after the search warrant was completed as he cited it as an ongoing investigation.

“It didn’t fit our typical description of what a house would be,” Ramos said.

Ramos said law enforcement was unsure if there was electricity, because the agencies reportedly didn’t turn anything on. Ramos also didn’t comment if there were additional firearms found.

“Although I can’t get into the specifics of what was found in the house, because that’s part of the ongoing investigation,” Ramos said, “it gave law enforcement great insight into the subject’s mental state and the way he carried himself.”

Additionally, Ramos said the FBI spoke to at least one member of Ator’s family.

The conversation between Ator’s family member and the FBI wasn’t disclosed, but Ramos reiterated the sentiment “it helped us understand what the subject’s state of mind was.”

Ramos said Ator didn’t have any federal charges against him and everything appeared to be at the state or local level. Ramos didn’t have a list of Ator’s state or local charges. Ator was arrested and charged by the Odessa Police Department for public intoxication, a class C misdemeanor, in May 26, 2014, jail records show.

In the events leading up to the shooting spree, Ator had reportedly called the FBI tip line about 15 minutes prior to shooting Pryor on Interstate 20 in Midland County on Saturday afternoon.

However, Ramos also said Ator’s conversation on the FBI tip line was incoherent ramblings, but there were never indications he would begin a shooting spree. Ramos also detailed the conversation was “subconscious ramblings in your head sometimes when you are thinking about things. That’s pretty much what it sounded like. It was somebody’s thoughts without a point.”

During Monday afternoon’s interview with Odessa Police Department Chief Michael Gerke, he characterized the mass shooting as “unique or rare.” Ramos echoed those statements on Tuesday.

“The expanse, the distance that was covered for the crime scenes,” Ramos said, “it was very resource intensive to process multiple crime scenes, but it makes it even harder when they are a distance away. This one stands out most strikingly because of that.”

Ramos warns the public to be wary of fraudulent GoFundMe accounts or other fraudulent charity drives. He detailed that people should research on who people give money to.

“The FBI and law enforcement will aggressively pursue any fraudulent GoFundMe pages or any type of charity drives that are fraudulent,” Ramos said.

Local law enforcement is being aided by both state and federal officials with a number of resources coming from the state. State Rep. Brooks Landgraf on Tuesday said many resources from the Texas speaker of the house’s office were used about a month following a mass shooting in El Paso. “I’ve also had colleagues from El Paso reach out to me and give me answers before I even knew what questions to ask,” Landgraf said.

He said he was at a wedding in Houston when the shootings occurred and that he immediately flew home and was in contact with the Gov. Greg Abbott’s office.  He praised the response of local law enforcement, as well as the resources being made available from the state and Abbott.

He said Odessans have rallied with fundraisers and other forms of support. “I’ve been saying that this is a tough place to live under normal circumstances and has always been that way,” Landgraf said. “It takes a special kind of person and we have a thriving community and tough and gritty people and we all take pride in the fact than when put to the test like we were on Saturday that we as a community come through with flying colors … We have love in our hearts for one another.”

The Odessa City Council held a press conference mostly wearing yellow or yellow ribbons prior to a meeting on Tuesday. Elected officials each spoke praising the first responders, medical teams and Odessans who came to the aid of each other during Saturday’s violence.

“Evil will not win,” District 5 member Mari Willis said. “Our city will rise.”

At Large member Peggy Dean called on Odessans to continue working together for change. “We need to continue to ask ourselves what can we do to make it better?”

District 1 member Malcolm Hamilton extended condolences and called upon the mayor and his fellow council members  to step up and create some type of Amber Alert system.

The city does have some type of alert system but it was not deployed on Saturday and it isn’t clear if it is an actual Amber Alert type system.

Via a press release, Abbott said Texas will not stand by and allow violence to continue to “rip apart our families and communities. As I said in Odessa, words alone are inadequate as we face this challenge. Words must be followed by meaningful action to prevent these senseless and devastating attacks.”

Abbott said he applauds the House and Senate for establishing the committees.

“Texas lawmakers have my full support as we work together to put an end to this violence. These committees, alongside the Domestic Terrorism Task Force and the Texas Safety Commission, are vital to our ongoing efforts to respond to these recent tragedies and protect innocent life. Texans stand as a united front against violence, and together, we will ensure a safer future for our state.”