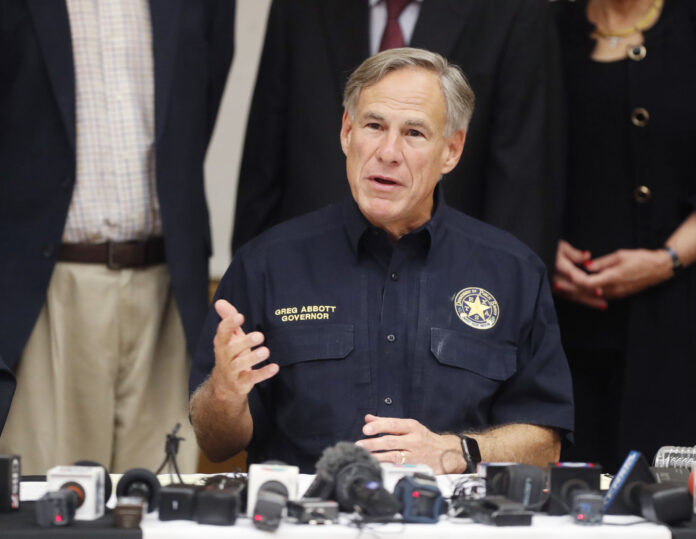 Gov. Greg Abbott, state legislators and top law enforcement officials from the Texas Department of Public Safety and local law enforcement came together to offer their support and praise for the Odessa community as it deals with the tragedy of seven dead and 22 injured in a mass shooting Saturday.

“As you all know, the lives of the people of Odessa and the entire Permian Basin region have been shattered. Over the last 24 hours, hearts have been broken” Abbott said at a news conference at University of Texas Permian Basin Sunday. “We want the people of the Permian Basin to know that all … Texans stand with you and embrace you in this time of challenge. We are here today and we’ll be here every day until this community is pieced back together. We know that words alone are inadequate. Words must be met with action.”

The suspect, Seth Ator, 36, of Odessa, was stopped by DPS on a traffic violation of failure to signal change of lane within the distance required. Ator then shot a DPS officer and was later shot dead by police.

Abbott expressed gratitude to the DPS and the health providers in the region.

“I want to express my deepest sorrow for the families who have lost a loved one. For all the victims who have been wounded, the hurt you feel is incalculable but you must hold on to the hope that you can also have,” Abbott said.

“We’re seeing this already with the family of one of the victims. Some of you know that one of the victims is a 17-month old child and moments before coming in here I received a text from the mother of this 17-month old. She said thank you all for praying. This is all of our worst nightmare, but thank God she’s alive and relatively well. She goes on to say that toddlers are funny because they can get shot, but want to run around and play. She says that we are thanking God for that. Her mouth is pretty bad, but will heal and can be fixed. Thankfully, it doesn’t seem like her jaw was hit just lip, teeth and tongue. She is having surgery tomorrow to remove the shrapnel from her chest and to fix her lip and mouth and to get a better look at her tongue,” Abbott said.

“We are thanking God for healing her and appreciate continued prayers,” Abbott added. “I want her family to know that they can be assured of those prayers today, tomorrow and every day as that young child continues her pathway to healing.”

Abbott said he has been to too many of these news conferences in Dallas, Sutherland Springs, Santa Fe and most recently in El Paso.

“… The status quo in Texas is unacceptable and action is needed,” he said.

After the shooting at Santa Fe High School, Abbott said he signed more than 15 laws to make schools safer from shooting attacks. He has also been working with victims and advocacy groups on solutions that can be taken by the state government.

“Most of all in the aftermath of what happened here in Odessa, we must replicate what we have seen in El Paso, Sutherland Springs, Santa Fe and Dallas and that is we must do what Texans do best in times of tragedy: we unite; we come together; we support each other; we reinvigorate our community with the love that we have for one another and knowing the Permian Basin the way that I do, I know that is exactly what is going to happen here in Odessa and Midland and the entire region,” Abbott said.

A DPS spokesman said two shootings in 28 days in the region, including El Paso, is unheard of.

Gerke said there were seven dead, 22 wounded. The gunman makes the death toll eight. Three of them are law enforcement officers. He said the victims range in age from 17 months to 57 years old.

He said people who want to drop off food and water should do that at UTPB. A prayer vigil was also held Sunday night at UTPB.

“As we also described, there are more than 15 crime scenes so frankly we’re all over the place here in Odessa with the DPS, the (Texas) Rangers and the Odessa police, so I would say all day today and probably all day tomorrow you’re going to see significant police and FBI activity throughout the city,” Combs said.

Ector County ISD Superintendent Scott Muri was on hand for the news conference.

He said the district’s leadership team is gathering to talk about family support and “how do we develop support for our families with the resources they need.”

Parents need to talk to their kids “during a time of crisis and trauma, so today we’ll be posting online resources in both English and Spanish for our families, then tomorrow we’re meeting again to talk about coming back to school on Tuesday, making sure we have extra counselors in place, additional resource officers in place” and determining how to provide support for the students and families as they deal with the loss of one of their own.

Midland Memorial Hospital received six patients. As of Sunday afternoon, three were stable; one was serious; one was critical but stable and one had died.

At Odessa Regional Medical Center, they received six victims. Four of them have been seen and discharged and as of noon Sunday, two were in critical care, but stable.