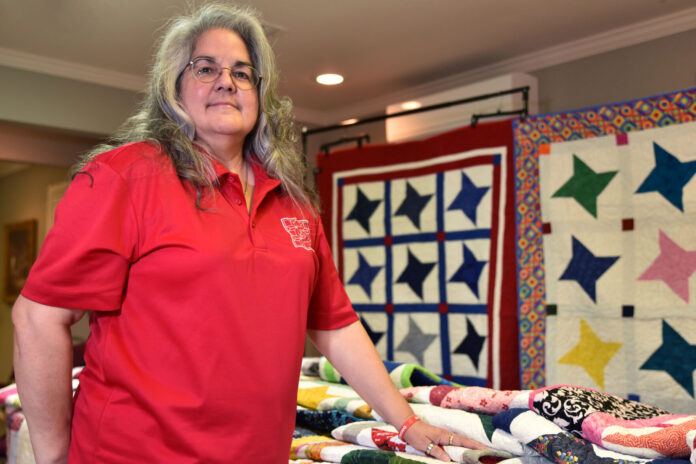 The Midland Quilters Guild presented about 60 quilts to victims of the 2019 mass shooting, their families and first responders in the culmination of a months-long project.

Guild president Rachel Garibay said the Permian Strong Quilt Initiative was a show of love through quilting to those affected by the tragedy.

On Aug. 31, 2019, Seth Ator drove around Odessa and Midland randomly shooting people. He killed seven and injured 25 others before he was shot to death near Odessa’s Cinergy Theatre.

“It just started out that when we heard what had happened,” Garibay said. “It just makes you think that it could have been any one of us that were affected.

“We wanted to do something to show our support for those people that were harmed and affected. So we did what we do best and we made quilts. We have been working on them for months and months. It was just a labor of love. We had so many people involved and we’re very appreciative of everybody who helped us out.”

Garibay said the project quickly expanded beyond the group’s 90 members to include quilters from across West Texas.

“We put the word out through the quilting community and people started donating blocks to us to make the quilts,” Garibay said. “We decided on the Friendship Star design as our quilt block because it embodies the friendship that we want to share with folks in both communities.

“We started receiving blocks from all over the Permian Basin, primarily Lamesa, Odessa, of course all of Midland and even as far as El Paso. We got enough blocks to make about 60 quilts. We want to bless the survivors’ families, the victims and the first responders because we feel it’s very important to show them how much we appreciate all that they have done and continue to do.”

Garibay said the quilts are mostly lap-size, about 50 inches by 70, made of 100 percent cotton fabric.

“They’re all pretty much the same,” she said. “We tried to make them three blocks by four blocks with a couple of borders. Some people did make quilts that were four across by five down, so they were slightly larger. Our request was that they be kind of lap-size and that’s a little bit larger than lap-size. (But) they’re all about the same size.”

Despite that sameness, Garibay said, each quilt also is unique.

“We asked for the Friendship Star blocks to be any colors,” she said. “It’s just amazing how they turned out so different with the same block, the same type of design. But they all look so different and beautiful.

Garibay said each part of the quilts carries a special meaning.

“The top, with its many colors and patterns, represents the community and the many individuals that are in it,” she said.

“The batting, the center or filler of the quilt, is the warmth. It represents our hope that the quilt will bring warmth and comfort, peace and healing to the person that receives it.

“And the backing is the strength that supports the other layers. It represents the strength of the recipient, the support of their family, community and nation.

“Each stitch that holds the layers together represents the love of the makers.”

The quilts were handed out Thursday at the Family Resiliency Center at 4682 E. University Blvd., Suite D, in Odessa.

“We were trying to figure out a way given the current health conditions to get the quilts out to the people,” Garibay said. “We had planned to do it back in March when we finally got all the quilts done, then the shutdown hit.

“We want to make it something for the anniversary. We’re going to set up a display of the quilts and the families can drive by. If they don’t want to, they don’t even have to get out of the car. They can see the quilts and get the one they want.”

Garibay said firefighters and law enforcement officers will be included in the recipients.

“The people that can’t make it, whether they don’t want to be out at this time or they don’t live in the area any more, we’re going to mail them their quilts to make sure everybody gets one.”

Garibay said the project kept the entire membership of the Guild busy.

“We would meet for sewing sessions to start putting the tops together, then send them out to the quilter who put the layers together and quilted it,” she said. “There were just so many different members of our guild who were involved to get these together.

“Somebody else embroidered the labels. We have ‘Permian Strong Made With Love’ on all the quilts so that they know where they came from and we hope that they find some comfort. We had just everybody involved doing different things, from making the blocks to all the way to making the whole quilt.”

While the coronavirus pandemic has forced the Guild to curtail its gatherings, it still holds virtual meetings and continues to welcome new members.

“We used to meet at the Alamo Heights Baptist Church every second Tuesday at 7 o’clock,” Garibay said. “Right now, because of all that’s going on, we are doing Zoom meetings. Anyone interested in joining us through a Zoom meeting or just learning more about our guild can contact me at (915) 241-0691.”