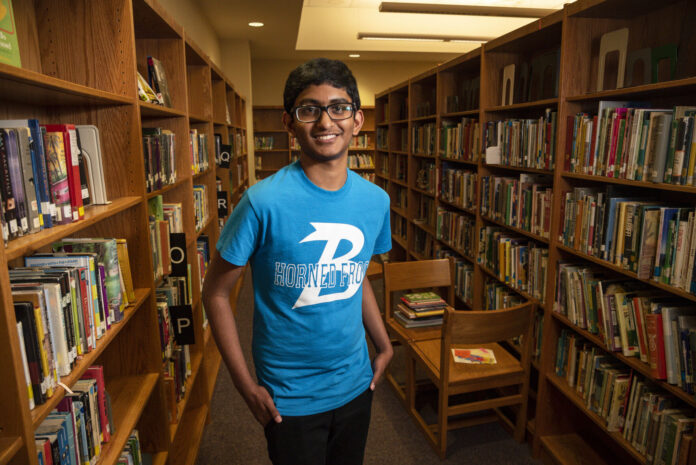 For the second year running, Bowie Middle School seventh-grader Shijay Sivakumar has earned the right to compete in the Scripps National Spelling Bee.

The preliminary rounds will be held virtually in June and the final rounds televised from July 8 from ESPN Wide World of Sports Complex at Walt Disney World Resort. The finals, featuring 10-12 accomplished spellers, will be broadcast live in primetime on ESPN2, the Scripps website said.

Winning the regional bee held at Odessa High School in March was his ticket to the national event, which had fewer contestants than usual.

His winning word was arenaceous, which Sivakumar said means living in sandy places.

“I was happy my studying didn’t go to waste and I felt relieved,” the 13-year-old said.

Sivakumar said he didn’t study a set number of hours per day.

“I just studied as much as I could every day. It just (depended) on the day and what I had to do that day.”

He added that he has been attending school virtually this year.

“I think it actually gave me more time to study,” Sivakumar said. “It helped with time.”

His parents, who are both engineers, helped him, as well.

He has a 10-year-old sister who also tried her hand at the bee.

“… She kind of got unlucky,” Sivakumar said.

He added that she missed the word forsaken. Sivakumar added that after eighth grade you can’t compete in the bee anymore.

“There’s still a lot more time for her than for me, so it doesn’t really matter that much for her,” he said.

Sivakumar said he enjoys the words he learns by studying.

To study, he uses online tools and books. He said memorizing words is not the way to go.

“If you do that, it’s not really a good way of studying. You just have to observe languages and see the different patterns of languages. That helps you study a lot easier so you don’t literally memorize words.”

His advice to peers would be to observe languages and discover patterns.

“Memorizing just won’t help you because in my first year I memorized and I was a lot worse than I am right now,” he said, self-deprecatingly.

An aspiring cardiologist, Sivakumar said he thinks the bee experience will help in the future.

“… It teaches you lots of lessons — to work hard and never give up,” he added.

His favorite subject in school is “probably math and I also like band.” He plays the clarinet.

He added that if he makes the top 12 in nationals he will be happy.

Sivakumar said he wished to thank ECISD for sponsoring the spelling bee and Bowie for hosting the school bee.