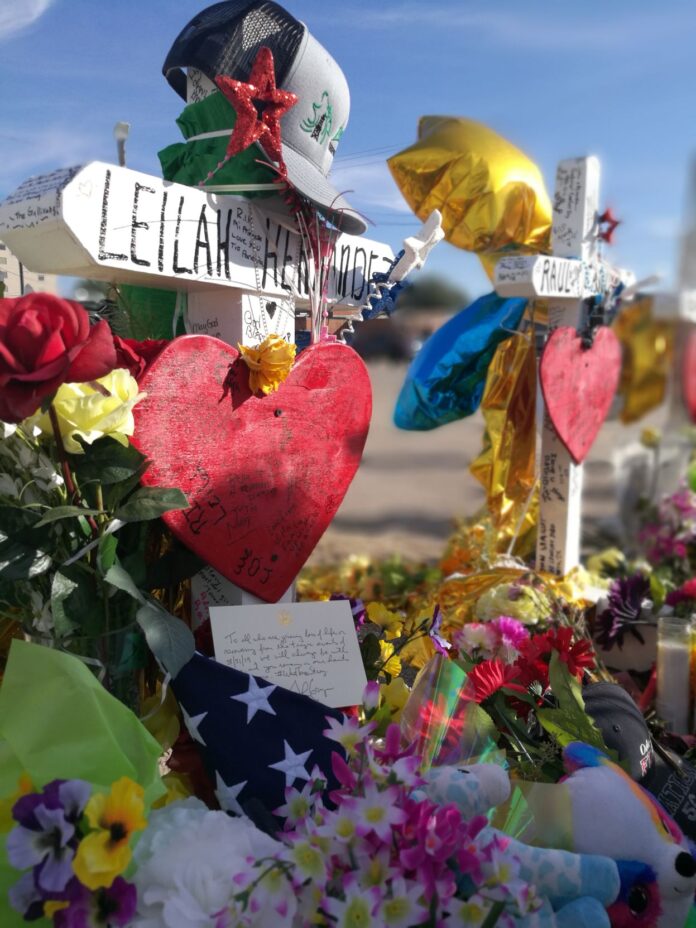 EDITOR’S NOTE: This is another in a series of stories detailing the events of Odessa’s Aug. 31 mass shooting. The stories are based on police reports that were released Monday following months of records requests to the City of Odessa.

Before switching vehicles during his hour-long shooting spree Aug. 31 in Odessa, the 36-year-old gunman, who killed seven people and wounded 25 others, shot and killed a 15-year-old girl as he slowly crept through a parking lot of a car dealership and even waved at her stepfather before opening fire.

There was terror at that scene, like the other tragic scenes that day. But there were also heroics. A teenage boy was wounded using his own body to try and shield his sister from the gunfire that would claim her young life that day.

A number of police reports, which were released by the City of Odessa on Monday, detail the events before and after Seth Aaron Ator murdered 15-year-old Leilah Hernandez in the parking lot of Freedom Buick GMC Truck on Aug. 31, 2019.

Moments after it enters the parking lot people can be seen running away.

According to Gonzales’ report, the surveillance video detailed the shooting happened at 3:29 p.m., while the report from OPD’s Sammy Eason stated he was dispatched to the car dealership at 4:47 p.m. about a gunshot victim.

The police report from Eason details Rodolfo Trejo, the stepfather of Nathan Hernandez and Leilah Hernandez, stated he was walking on the north side of the parking lot looking at a GMC truck. Trejo stated his wife and two children were walking on the south side behind the vehicle.

Trejo reportedly saw a tan or gold Toyota Corolla driving west toward him and a man with long blond hair waved at him. Trejo stated he started to wave back and that’s when he saw a barrel of an unknown style rifle being pointed out of the window at him.

Trejo stated he jumped when he saw the firearm and that he twisted sideways, the report detailed. He heard several shots and then the vehicle drove off. Trejo stated that’s when he heard the screams and his daughter was lying on the ground. He stated he took off his shirt to use as a pressure dressing because she was bleeding from her shoulder.

Eason stated in his police report that he was dispatched to Freedom Buick GMC Truck about a gunshot victim, 15-year-old Hernandez. Eason stated he knelt by the girl’s head and applied direct pressure to the wound on her neck and attempted to keep her airway open at the same time.

Eason stated when paramedics approached that Hernandez was unresponsive and unblinking. She had reportedly stopped breathing and the paramedics asked Eason to move the pressure dressing, which was Trejo’s shirt, to view the wound.

Following treatment at the scene, the paramedics stated she was gone and there was nothing they could do for her.

Paramedics stated they were going to leave the scene and move onto the next one, the report detailed. A sheet was placed over the 15-year-old and the paramedics left.

During an interview with OPD’s Andrew Stephen Garris at Medical Center Hospital, Nathan Hernandez stated that he and his sister, Leilah Hernandez, were at Freedom Buick GMC Truck with their parents and were waiting for the dealership to bring them keys so he could test drive a vehicle. Nathan Hernandez said while they were in the parking lot, he saw a brown four-door vehicle driving throughout the parking lot and approached them. He stated the vehicle had damaged windows and the driver was a white man with long hair.

Nathan Hernandez stated the driver drove near them and pointed a rifle out of the vehicle and began shooting at him and his family. He stated he attempted to use his body as a shield to protect his sister and he was shot in the right forearm.