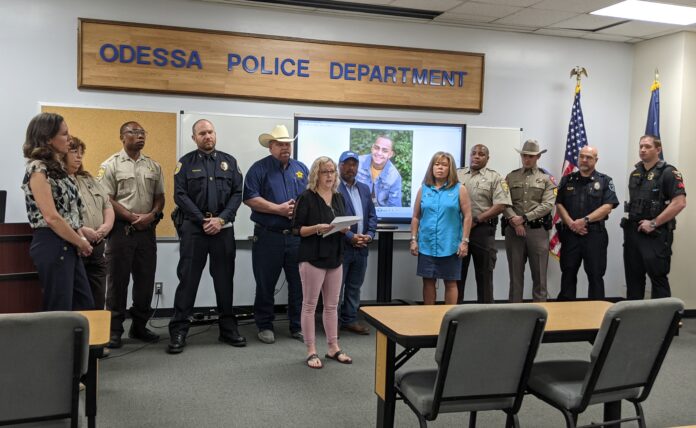 Bryn Dodd shared her first-hand experience of the effects of drinking and driving with members of the media on Friday morning at the Odessa Police Department.

Dodd’s message is aimed at recent high school graduates as part of Odessa Crime Stoppers’ Project Graduation that is scheduled to take place over the next two weekends.

“I’m standing here today to beg you to not drink and drive. If you are 21 and older, don’t buy alcohol for minors or host parties to serve alcohol to minors. One decision, one moment could change everything. Tomorrow isn’t promised or guaranteed.”

Odessa Crime Stoppers is teaming up with local law enforcement agencies for Project Graduation, which is a two-weekend operation that is aimed at underage drinking, parties and drug use. The operation will take place Saturday (today for print), May 28 and May 29.

DPS spokesperson Sgt. Oscar Villarreal said on Friday morning that graduation is supposed to be the beginning of a graduates’ adult life, not the final chapter.

“You are just starting your adult life,” Villarreal said of recent high school graduates. “All you’ve done is take the baby steps. Now life starts and welcome to the world.

“You have military service, college, technical school or whatever your career path is. This is only the beginning.”

Susan Rogers, spokesperson for Odessa Crime Stoppers, said during Friday’s press conference anyone with information that leads to at least one arrest or citation there will be a $200 reward. Rogers explained that the reward could increase depending on the size of the party or what is going on at the party.

Odessa Police Department Chief Michael Gerke said graduation is a major milestone in a person’s life and not to ruin that with one bad decision. He also urged parents to not host parties where there will be underage drinking.

“There are tons and tons of citations, arrests or charges that can be filed and we will file them,” Gerke said. “It’s the Odessa Police Department. It’s our local partners. It’s our state partners. We are all going to be out there.”

Dodd said there are parents that believe if a party happens under their watch that they are in control of the situation, but she explained that control is gone when one child leaves without their knowledge and something bad happens.

Police searching for man in connection to sunglasses theft