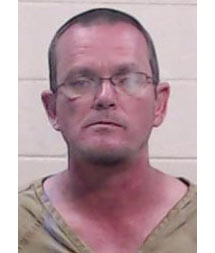 A 43-year-old man was arrested after he reportedly attempted to coerce witnesses to change their statements made to detectives at the Odessa Police Department.

James Benjamin Carter was charged with tampering with a witness, a third-degree felony.

The Odessa Police Department received a call at 7:47 p.m. April 14 from a victim needing to report a violation of a protective order, an OPD probable cause affidavit stated.

The victim was reportedly identified as Carter who stated that his ex-wife, identified as Madeline Carmen Lopez, was violating an emergency protective order by making alarming and embarrassing statements about his person to several known acquaintances.

Detectives made contact with Carter and attempted to gather evidence of the claims, the affidavit stated. Carter stated that a local business received a phone call from Lopez stating that he is a drug user and is known to sleep with prostitutes. Carter also stated that Lopez called his boss saying the same embarrassing statement, however, he refused to provide any of his boss’s information.

After making contact with the local businesses, detectives reportedly spoke with four witnesses who all confirmed that Lopez and Carter are regulars and that Lopez never called up to the center to make any statements.

One witness stated she spoke to Lopez personally and that Lopez arrived to the business and “vented” that she and Carter were no longer together but never made any alarming or embarrassing statements about Carter, the affidavit stated.

When Carter was reportedly advised that there was no evidence to validate his claims and that all witnesses from the business stated Lopez never made any comments, Carter became upset and demanded for Lopez to be arrested without any evidence.

On April 26, detectives received a phone call from the manager of the business stating that Carter called the business and attempted to coerce her and her employees into changing their statements to the investigator by saying that they all lied, the affidavit stated. Carter knowingly tampered with a witness by coercing the witness to testify falsely.

Carter was arrested and booked into the Ector County Law Enforcement Center on April 27, jail records show. He has one bond totaling $15,000 and was still in custody as of Wednesday afternoon.