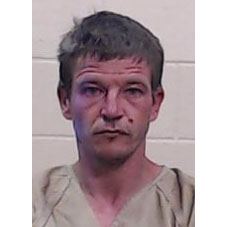 A 36-year-old man was arrested after he reportedly pointed a pistol at a woman while demanding money for slide sandals.

Marc Anthony Uzzell was charged with aggravated assault with a deadly weapon, a second-degree felony, unlawful possession of a firearm by a felon, a third-degree felony, and driving while license suspended, a class C misdemeanor. He is also being held by the U.S. Marshals.

The reported assault happened around 6:17 a.m. April 27 as Ector County Sheriff’s Office deputies were dispatched to the RV Park located near Moss Avenue and Palomino Drive, an ECSO probable cause affidavit detailed.

The complainant, identified as 41-year-old Melissa Madrid Deanda, reportedly told dispatch that she had moved to the Stripes located at the intersection of Moss Avenue and 42nd Street.

Deputies arrived at the listed Stripes location and made contact with Deanda who stated that a man she identified as “Marc” had arrived at the RV Park and displayed a small firearm while demanding money he claimed he was owed, the affidavit stated.

Deanda reportedly told deputies that “Marc” had bought her a pair of “Jordan” brand slides for $80 and was now demanding she pay him $100 for the slides. Deanda stated that “Marc” arrived at her residence and pulled a firearm from his back waistband. Deanda described the firearm as a small pistol.

A driver’s license check was completed on Uzzell which showed that his driver’s license was currently suspended as of Oct. 23, 2019, the affidavit stated. Uzzell was placed under arrest for driving while license invalid, a class C misdemeanor.

During an inventory of the vehicle, deputies located drug paraphernalia inside the Eclipse, the affidavit detailed. A probable cause search was conducted at which time a Glock 42 .380 S/N ABLE144 was found in the center console of the vehicle.

A criminal history check was reportedly completed which showed that Uzzell was a convicted federal felon and was currently on federal probation.

Uzzell was arrested, charged and transported to the Ector County Law Enforcement Center. He has two bonds totaling $40,000 was still in custody as of Monday afternoon, jail records show.