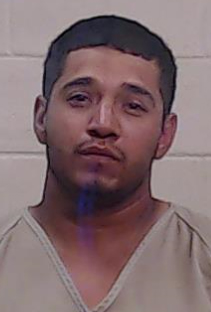 A 31-year-old man was arrested after he reportedly choked his wife and threatened to assault her with a pair of scissors.

The reported assault happened at 10:05 p.m. in the 4000 block of East Everglade Avenue, an Odessa Police Department probable cause affidavit stated.

The victim, identified as Veronica Solis (sic), reportedly told officers that her husband, Juan Silos, had assaulted her by strangling her and during the assault he threatened to stab her with a pair of scissors.

Solis stated she was arguing with Silos in their kitchen when her husband pushed her up against the refrigerator and placed his hand around her neck, the affidavit stated. Solis stated her husband began strangling her to the point she almost “passed out” and felt like she “couldn’t breathe.”

Solis reportedly told officers that Silos grabbed a pair of green scissors from the counter and threatened to stab her with them by stating “is this what you want” while doing the stabbing motion to her. Solis stated she then told her daughter to call the police due to being in fear for her life.

Officers saw the following injuries on Solis were red marks around her neck consistent with a hand being placed around it and being strangled, the affidavit stated.

A witness at the scene reportedly told officers she saw Silos strangling Solis with his hands and later saw Silos holding the green pair of scissors in his hand.

Silos was arrested, charged and transported to the Ector County Law Enforcement Center. He had one bond totaling $50,000 and posted bail on June 20, jail records show.