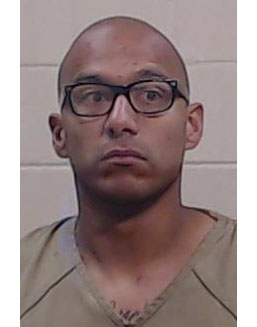 A 27-year-old man was arrested when he reportedly choked his mom after they had an argument about him eating at the table with a phone.

Serjio Marquez was charged with assault by strangulation or suffocation (family violence), a third-degree felony.

The reported assault happened at 7:05 p.m. May 2 at the Peppertree Place Apartments located in the 4600 block of Oakwood Drive, an Odessa Police Department probable cause affidavit stated.

The subjects reportedly involved were identified as Soyla Marquez and her son Serjio Marquez. While officers were speaking with Soyla Marquez, they saw a red mark around her neck, which is consistent with a hand grip.

Soyla Marquez stated she and her son got into an argument about her son eating at the table with a phone, which led to Serjio Marquez grabbing her by the neck, the affidavit stated. Serjio Marquez gripped his mom by her throat with his thumb, which cut off her breathing.

Serjio Marquez was arrested, charged and transported to the Ector County Law Enforcement Center. He has one bond totaling and $20,000 and was still in custody as of Thursday afternoon, jail records show.