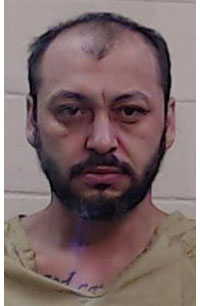 A report from the Odessa Police Department detailed that a 41-year-old man assaulted his brother with a knife.

The reported assault happened at 3:04 p.m. May 2 in the 1400 block of E. Fourth Street, the OPD police report detailed. The complainant was identified as Manuel Hernandez Jr.

The Odessa American requested the probable cause affidavit and the police report in the aggravated assault charge against Daniel Hernandez. The City of Odessa redacted the name of the complainant and the location the assault happened in the probable cause affidavit. The complainant’s name and location of the incident was not redacted in the police report.

Manuel Hernandez stated he told his brother he called the cops and Daniel Hernandez then became irate, pulled the knife up to his own throat and performed a slicing motion across his neck, the report stated.

While officers were speaking with Manuel Hernandez, they saw what looked like sandwich condiments all over his face and shirt. Manuel Hernandez also stated that Daniel Hernandez then threatened to slash his tires of his vehicle with the knife.

Daniel Hernandez was arrested, charged and transported to the Ector County Law Enforcement Center. He has one bond totaling $40,000 and was still in custody as of Tuesday afternoon, jail records show.