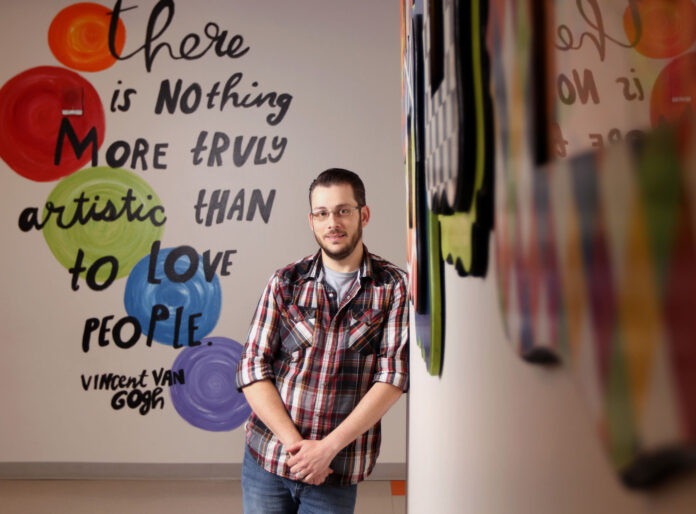 Like many Odessans, Compass Academy Charter School art teacher Adam Cross had never lived in a community impacted by a mass shooting.

But on Aug. 31, 2019, he was — personally. A former student, 15-year-old Odessa High School sophomore Leilah Hernandez was among seven people killed and 25 injured by gunman Seth Ator.

Up until this year, Cross had taught art at Ector College Prep Success Academy. This is his first year at Compass. In eighth grade, Hernandez was a student of his. 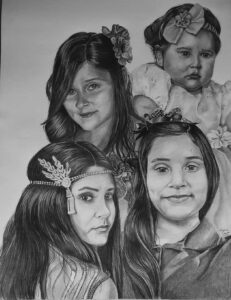 Cross has always done his own work in addition to teaching. Lately, he is focusing more on pencil portraits of people. He had previously created portraits for people who had lost loved ones and even people who just wanted a drawing of their family member, or pet.

His drawing includes portraits of Leilah through the years from a baby to a drawing based on her quinceañera picture.

“Leilah herself was an inspiration; just remembering her and the type of student that she was and just her personality made me think of it,” Cross said.

“… At the beginning, she was a little quiet, a little soft spoken, kind of shy a little. But once she got out of her shell a little bit, she was just so friendly and so polite just a really nice student; always respectful. Yes sir, no sir …,” he added.

“I found her because she had a picture of Leilah up as her profile picture and I just sent her a message through Facebook messenger. I told her who I was and I was Leilah’s teacher and I draw portraits for people on the side and that I wanted to do one for her free of charge,” he said. “If she had some favorite pictures … she could email them to me then I would use those for the drawing. She said she would love that and she sent me the pictures. Whenever I finished, I drove it out to their house. We talked for a little bit and shared some memories of Leilah.”

When he gave the family the drawing, there as a moment of silence.

“They were just staring at it,” Cross said. “Her mom started getting teary eyed a little, but her dad was there and her brother was also there. He was with her when she was killed.”

Cross said they sat and shared memories from Leilah being in class and the things she liked to do.

“Her mom showed me some of her artwork that she had made. … ,” Cross said.

He said Leilah’s death hit people hard because she was still young.

“… I think that it hits people a little harder just from hearing people talk about her and saying how sweet she was. I think it’s touching people’s hearts to hear what type of person she was and just being in the community itself,” Cross said.

Cross, who grew up mostly in Waynesboro, Pa., has lived in Odessa for about 10 years.

“I don’t know what other kind of tragic events have happened around here. I know there’s oilfield accidents and things like that, but for something like this I don’t know if anything like this has ever happened and I think just the shock in the community and then just seeing how many people jumped up so fast to help with restaurants feeding first responders and people taking food out and water and calling to check on their friends and family and praying for each other; just how the community stepped up more so than I would have expected,” Cross said.

“… It was really inspirational just to know how quickly and how a vast majority of the community stood together to help each other and that was one of the reasons that it inspired me to do this drawing for Leilah’s family,” he added.

Cross and his wife, Heather, have a 2-year-old daughter. Heather teaches art to middle school students at Compass.

Leyva said in a Facebook message that she’s grateful for Cross’s portrait.

“On behalf of my family Leyva, Hernandez and Trejo, I want to give you thanks Adam Cross for your kindness in remembering my daughter Leilah Hernandez. It is a very thoughtful gift that we will always Cheris and always have a memory of how my daughter was. Your work is outstanding and your time to do this for us is very much appreciated. You might say that you couldn’t offer much, but to us it’s a treasure that we will always have thanks to a wonderful teacher that my daughter had. Thank you for your kindness and for remembering my sweet girl,” Leyva wrote.

Cross earned a bachelor of fine arts degree from Edinboro University in Edinboro, Pa., choosing to focus on drawing.

“I was the best at that. Whenever I got my bachelor’s degree in fine arts I had to take classes in all the art media. I always liked drawing best. It was just something that I was always good at. I haven’t been able to find many people that still do. A lot of art now is digital, like digital portraits. I don’t see too many hand drawn ones. To me, I think that just kind of adds a little bit of the artist’s personality,” Cross said.

He got into teaching because he wanted to do something in the art field, but it’s competitive and there’s no job security.

“I knew I wanted to start a family and do all that and just only selling art work wasn’t secure enough for me,” Cross said.

In high school, he would help other students out with their art, though, so he had an inkling he could teach the subject.

Cross’s brother is a youth pastor here and knew ECISD Communications Officer Mike Adkins. The district had a teacher shortage even 10 years ago, so Cross came west.

Since his artwork has gotten notice, Cross is now getting requests from all over. He recently got one from someone who wants him to make a portrait of President Trump.

It generally takes about two weeks to do a drawing, depending on how much free time he has.

“I’ve gotten 50 friend requests and right now I have 13 people that want me to do drawings for them, too. It could potentially be months of work,” he said.