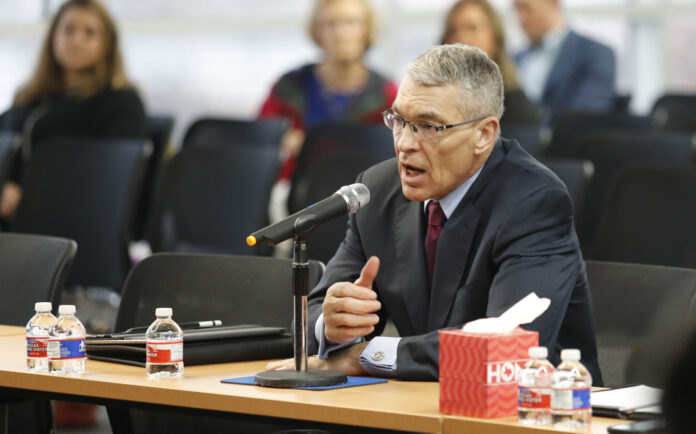 Details about what happened before and after the Aug. 31 mass shooting in Odessa and Midland continued to surface during the Texas House Select Committee on Mass Violence Prevention & Community Safety.

One concern brought up by committee chairman Rep. Drew Darby, R-San Angelo, was closing the gaps of communication between various law enforcement agencies.

Odessa Police Department Chief Michael Gerke said Thursday in the Joe Zant Community Room at Odessa College that the 36-year-old gunman Seth Ator, who killed seven people and injured 25 others during that shooting, drove through his employer’s gate after being terminated from his position with the company just prior to the shooting spree.

Gerke said the company, previously identified as Journey Oilfield Services, called OPD to get its property back. OPD responded to that call, but Ator wasn’t at the business as he had already driven through the gate.

Gerke said the idea of building a regional communication center, which would allow members of all law enforcement agencies in the area to be under one roof, would be the best option, but not the most feasible.

“I don’t think that’s a viable option, because I don’t think the money exists to create that locally,” Gerke said after he was finished speaking on the panel. “The best we are going to be able to do is to join these systems. We have to join as many of these systems together as we possibly can.

“With the Odessa system, when I became chief, one of things that I let everyone know when we went forward with the radio system that we wanted to join with the City of Midland’s system. We want to create a tremendous radio system.”

A majority of the first responders were in favor of the regional communication center.

However, Ector County Sheriff Mike Griffis shared the same concern that Gerke had about how it would be financially accomplished. Griffis said it’s an idea he believes would be beneficial to law enforcement agencies in the Permian Basin.

“The regional communication center would be fantastic, because this dispatcher is getting this information and they had all of these other individuals that are committed to each individual agency,” Griffis said. “I don’t know how much it would cost. A cost study would have to be done. I’m sure it would be a lot of money.”

Michele Racca, the director of Public Safety Communications for OPD and the City of Odessa, said during the meeting the emergency communication center averages 745 calls a day.

Racca said there were 451 calls made in the hour that Ator went on a shooting spree. There were also 88 unanswered 911 calls.

“Our phone lines didn’t crash,” Racca said during the meeting. “They were overwhelmed.

“All those 88 calls were called back, but probably not in a timely manner due to the number of calls that were coming in.”

Landgraf told Haley that he was going to personally read every letter. Haley said during an interview with the Odessa American the sentiment that Landgraf was going to read all of the letters was encouraging.

“It really reassured me when (Landgraf) shook my hand, looked me in the eyes and told me that he was going to read each letter individually,” Haley said. “It’s really nice to hear that affirmation.

“There were definitely doubts when I hosted the letter writing campaign that not many people would show up. I was proven wrong by that. There were the doubts that we wouldn’t receive that many letters. That was proven wrong. This was the final step that our voices would be heard.”