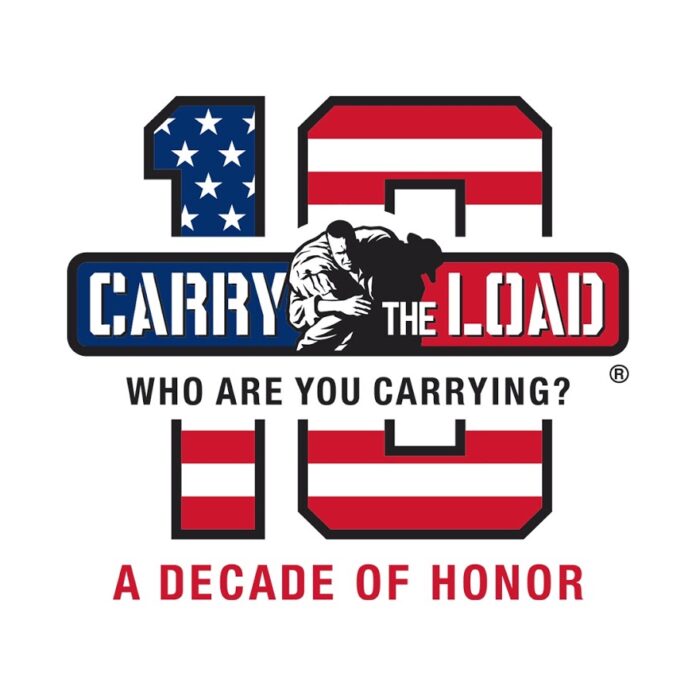 For 10 years now, Carry the Load has been on a mission to remember fallen military members and first responders.

Since 2011, Carry the Load’s mission to restore the true meaning of Memorial Day has grown into a national movement.

Founded by U.S. Navy SEALs Clint Bruce and Stephen Holley, Carry the Load includes a national relay that reaches all 50 states, split up into separate sections.

This year’s West Coast relay will once again make a stop in the Odessa-Midland area.

“Carry the Load is about bringing awareness to Memorial Day and getting people to honor the true meaning of it,” West Coast Relay Manager Michael “Goldy” Golden said. “It began in 2011 when a couple of Navy Seals who lost some friends and they were disturbed by the way Memorial Day was handled with the mattress sales and hamburgers and beers, but no respect for the fallen. They got together and put some backpacks together and some weights and started walking. An old fellow asked who they were carrying and that’s become what we’re about.”

That original relay featured a 20-hour and 11-minute march that took place on Memorial Day 2011 in Dallas.

Since then, a Midwest, West Coast and East Coast route have been added with each of them ending in Dallas.

The West Coast relay started on April 29 in Seattle.

During that relay, the participants walked and cycle across the 4,600 mile journey, stopping and setting up tents at times to talk and hear people’s stories about loved ones who have also served.

The end of the relay is scheduled for May 30.

“We set up at various spots; sometimes in mall parking lots,” Golden said. “We bring out our table that we have people sign and as they walk and talk to us. We … ask them if there’s someone they’d like for us to carry and put that on a bib and dedicate a walking leg to them, or a cycling leg. We do have people registered online so that we can provide them with more information to our website. It is 32 days for the West Coast.”

Golden says that right now, they have a total of 10 people on their relay.

“We have eight that are performing the function of carrying the load and then we have two bus drivers and they are an integral part of what we do.,” Golden said.

This year’s West Coast Relay will stop in Odessa on May 20.

“The relay segments, we call them exchange points, we either walk or we cycle so we’ll stop at an exchange point,” Golden said. “Depending on what the COVID protocol is, we’ll stop and say hello and share some stories and after a set period of time, we’ll take off from there and walk anywhere from 3 to 6 miles to the next exchange, which might be either a police station or a fire station or a mall parking lot. If we have longer distances to go, like across Arizona and there’s not very many urban places for us to stop at, so we’ll be riding or walking most of the way.”

In the past, Carry the Load’s West Coast Relay has usually stopped in Odessa.

Golden says the plan for the exchange in Odessa is to stop at the Walmart Super Center at 2450 Northwest Loop 338.

On Friday, Golden says they’ll make a stop at the Legacy Harley Davidson at 7 a.m. and leave from there.

“We’ll be walking in Odessa from each one of those points and we’d love to have people come out and walk with us and we carry the American flag and the Carry the Load flag,” Golden said. “We hear people’s stories when they walk with us and we tell them ours. We try to keep people alive by keeping their stories going.”

Last year’s relay was virtual due to the pandemic.

Golden is thankful that they are able to resume to a slightly normal relay this year.

“It’s going great,” Golden said. “We’re not really post-COVID, so we were uncertain about what our turnout would be. But it’s been really good. We’ve had a lot of people turn out. A lot of people that we’ve worked with in previous years are here and we will walk with them and talk with them and share the stories about our friends and people that we’ve known who are fallen.”

The weather so far has not been an issue.

“I got to tell you, I’m from Fort Worth, but it’s been incredible weather,” Golden said. “It’s been cool. There’s been a very little rain. We had a little bit of drizzle in Portland. It’s starting to get hot in Palm Springs and we expected that. But back home in Dallas-Fort Worth, it’s been 60 degrees and raining from what I understand, so we’ve been blessed with the weather we have.”

This year, people can participate in the 32-day event in person or virtually. They can come out to cheer the relay team or join them by walking.

“We’re embracing a hybrid for our participation this year,” communications lead for West Coast Relay Megan Heathcott said. “So while we’re happy to be here in person. We understand that not everyone can be here, so we also do live updates on our social media platforms and have guest speakers available that we share on our social media.”

Michael Garlock, from St. Louis, Mo., is one of the participants on this year’s relay.

“I was signed up to be on a relay last year, but unfortunately with COVID and everything, we had to go virtual,” Garlock said. “It’s been awesome to be back on the road this year. It’s been different than year’s past because of guidelines and making sure that everyone is safe, but it’s been a breath of fresh air and it’s a positive cause. It’s been nice to see the support that we’re getting.”