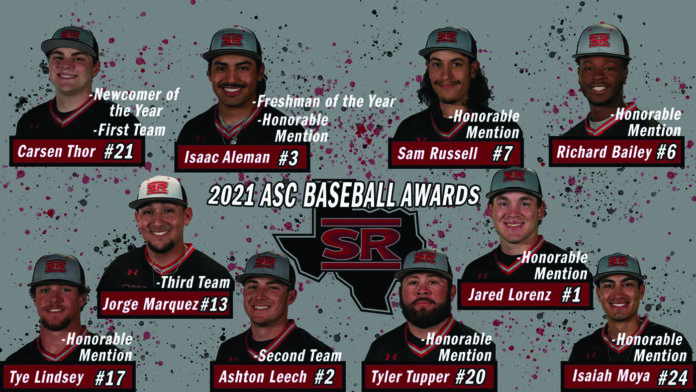 ALPINE Baseball took home several ASC accolades including Freshman of the Year and Newcomer of the Year as 10 Lobos were listed to the 2021 American Southwest Conference baseball awards and all-conference teams in an announcement made May 17 by the conference office.

Aleman slashed .354 with 35 hits, 19 runs, two home runs, 21 RBI and two steals in his freshman campaign. His eight doubles were good enough for second on the team and he was also second in walks with 14.

Carsen Thor – 1B: Newcomer of the Year – All-Conference First Team

Thor led the Lobos in several categories with a .379 average, 50 hits, and 43 RBI. He was tied in runs scored with 32 and was second-best in home runs with seven and total bases with 80.

His 43 runs batted in were good for second-best in the ASC.

Thor began his Sul Ross career with an ASC Hitter of the Week nod on Feb. 17 after hitting .625 (5-for-8) with six RBI, five runs scored and a 1.000 slugging percentage in a two-game sweep of University of Dallas.

Marquez led the Lobos in doubles, triples and home runs with 11, three and eight respectively. He batted .347 on the season and was only behind Thor with 43 hits and 31 RBI. He tied Thor with 32 runs scored and led the Lobos with eight stolen bases in 11 attempts.

It is his second time on the all-conference list after being named to the honorable mention in 2019.

Lorenz hit .258 on the season but belted seven home runs and 21 RBI. He scored 23 runs and also stole four bases.

He twice came up clutch with walk-off home runs on Feb. 12 against University of Dallas and April 16 against Concordia.

Lorenz was named ASC Hitter of the Week on April 26 after batting .500 (7-for-14) with two home runs, three doubles, nine runs batted in, seven runs scored, and 16 total bases against McMurry.

Russell led the team with four wins and 61.1 innings pitched on the season. He posted a 6.31 earned run average in 10 starts and 12 appearances. His two complete games and 54 strikeouts were also team-highs.

He matched a career-high 11 strikeouts in a game on April 23 with a complete game win over McMurry.

Moya finished with three wins on the season and a 6.34 ERA. His 61 innings pitched and 50 strikeouts were both good for second on the team.

His lone complete game came on April 1 when he surrendered no earned runs, striking out six and walking none in a 6-2 win against Mary Hardin-Baylor.